Crimean Tatars Will Have to Vacate Land – Official 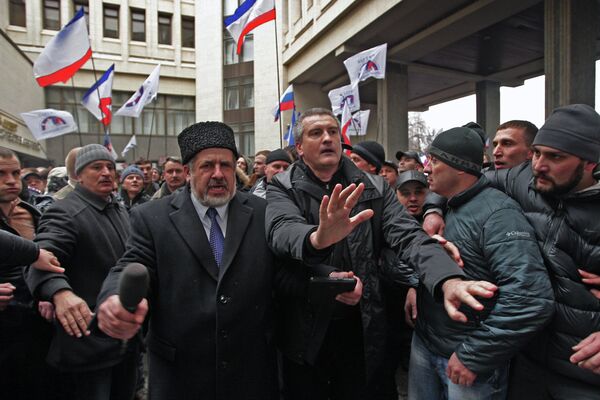 Ukraine’s breakaway region of Crimea will ask Tatars to vacate part of the land where they now live in exchange for new territory elsewhere in the region, a top Crimean government official said Tuesday.

MOSCOW, March 18 (RIA Novosti) – Ukraine’s breakaway region of Crimea will ask Tatars to vacate part of the land where they now live in exchange for new territory elsewhere in the region, a top Crimean government official said Tuesday.

Crimean Deputy Prime Minister Rustam Temirgaliyev said in an interview with RIA Novosti on Tuesday the new government in Crimea, where residents voted Sunday to become part of Russia, wants to regularize the land unofficially taken over by Crimean Tatar squatters following the collapse of the Soviet Union.

“We have asked the Crimean Tatars to vacate part of their land, which is required for social needs,” Temirgaliyev said. “But we are ready to allocate and legalize many other plots of land to ensure a normal life for the Crimean Tatars,” he said.

Temirgaliyev emphasized that members of the Tatar community could receive senior political positions in the new government, in an apparent move to ease ethnic tensions in the region.

“I think that Crimean Tatars will be well represented in the government and parliament,” he said.

The Crimean Tatars, a historic people of the region, were deported en masse to Central Asia by Soviet leader Joseph Stalin 70 years ago. Although many of them returned in the early 1990s, they were unable to reclaim the land they had possessed before their deportation.

The Tatars, who make up 15 percent of Crimea’s population, remain amongst the staunchest supporters of the new government in Kiev that ousted President Viktor Yanukovych last month.

Crimea, a largely Russian-speaking autonomous republic within Ukraine, was part of Russia until it was gifted to Ukraine by Soviet leaders in 1954.

Putin signed a decree Monday recognizing Crimea as an independent state, following a referendum Sunday that saw voters on the peninsula overwhelmingly support secession and reunification with Russia.