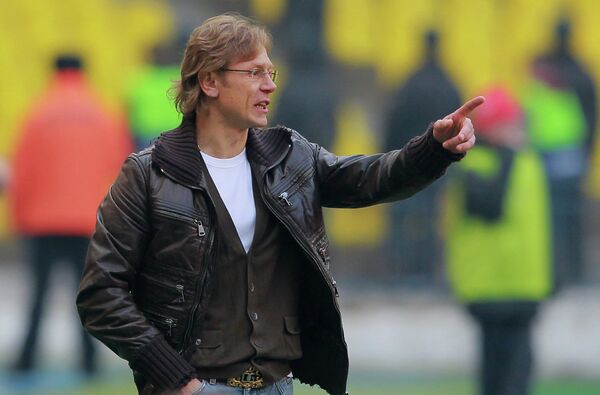 In the first three games since the winter break ended, Karpin has overseen a humiliating defeats to third-tier Tosno in the Russian Cup, second-from-bottom Terek Grozny in the league, and on Monday night the squandering of a 2-0 lead to draw 2-2 with Anzhi Makhachkala.

The last game resulted in billionaire owner Leonid Fedun announcing unprompted that Karpin's fate would be decided at Tuesday's board of directors meeting, and board member Dzhevan Cheloyants told R-Sport that the decision was taken to dismiss the 45-year-old.

"Karpin has been thanked. The caretaker manager will be Gunko," said Cheloyants, referring to reserve team coach Dmitry Gunko.

The club is yet to settle on a successor but Cheloyants said a comeback was possible for Stanislav Cherchesov, who guided the club to a second-placed finish in 2007. Cherchesov, who won 39 caps for Russia as a goalkeeper in the 1990s and played more than 300 games for Spartak, currently manages top-tier side Amkar Perm.

Spartak are by no means out of the title race, lying in third just four points off Lokomotiv Moscow's lead with nine games remaining.

Karpin is a Spartak legend who won three titles with the team in the early 1990s before moving to Spain.

He coached Spartak between 2009 and May 2012 before stepping aside in favor of his former Real Sociedad teammate Unai Emery. When Emery was fired in November 2012, Karpin left his role as Spartak’s general director and has been in charge of the first team ever since.