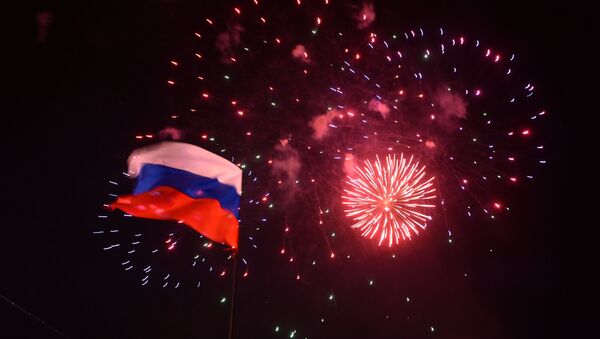 © Sputnik / Mikhail Voskresenskiy
/
Go to the photo bank
Subscribe
The Crimean parliament declared the region’s independence from Ukraine Monday and formally applied to become part of Russia after a referendum Sunday showed overwhelming support for reunification.

With all ballots counted, 96.7 percent of voters in the southern Ukrainian region had backed reunification with Russia after 60 years as part of Ukraine.

The Black Sea peninsula, with a Russian ethnic majority, has sent a formal request to Moscow to join Russia while preserving its status as a republic, the parliament said in a statement.

The Crimean parliament declared independence last week ahead of the referendum, promising that if the measure passed the de facto independent government would immediately request reunification with Russia.

“The republic of Crimea appeals to the United Nations and to all countries of the world to recognize it as an independent state, established by the Crimean people,” a document approved Monday by the parliament declared.

A Crimean parliamentary delegation is due to arrive in Moscow on Monday to discuss the procedures required for Crimea to become part of Russia.

In the latest sign of Crimea’s growing attempts to align with Russia, its parliament voted Monday to change the clock in the republic to Moscow time on March 30 and introduce the Russian ruble as an official currency and abandon Ukraine’s hryvnia by January 2016.

The Russian Foreign Ministry called on the international community Monday to recognize the right of Crimea to determine its own path.