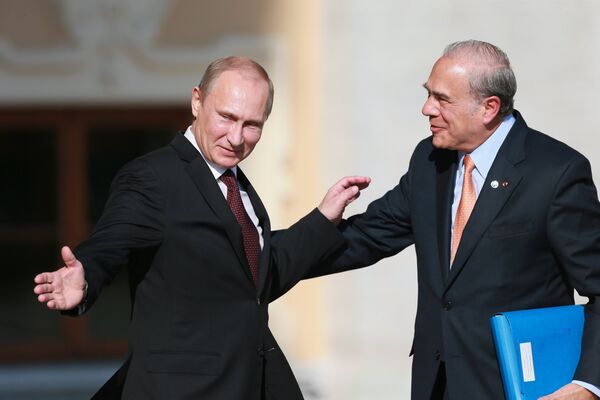 The Organization for Economic Cooperation and Development said on Thursday it had put Russia’s accession process on hold amid the ongoing international standoff over Ukraine's autonomous republic of Crimea.

MOSCOW, March 14 (RIA Novosti) – The Organization for Economic Cooperation and Development said on Thursday it had put Russia’s accession process on hold amid the ongoing international standoff over Ukraine's autonomous republic of Crimea.

Troops lacking official insignia but widely believed to be under Russian command have seized military bases in recent weeks in the Russian-speaking republic, which has scheduled a referendum on secession and annexation by Russia for Sunday.

“The OECD has postponed activities related to the accession process of the Russian Federation to the OECD for the time being,” the organization said on its website.

The OECD also said it would respond positively to a request by Ukraine to boost cooperation with Kiev.

A source in the Russian government confirmed the information in an interview with the Prime news agency, but said that Moscow would continue implementing its 2007 accession roadmap regardless of the OECD's decisioin.

“Hopefully the decision will be revised as soon as possible. We will continue our accession efforts and will inform our partners about the results,” he said.

Although Russia has denied sending troops to Crimea, claiming the masked Russian-speaking men there are self-defense squads, international leaders have threatened Russia with sanctions for violations of the territorial integrity of Ukraine, sending Russian markets and the ruble reeling in recent weeks.

The United States and the European Union have threatened Russia with asset freezes and travel bans of officials involved in the Crimean affair, and all seven fellow members of the G8 group of powerful democracies have put preparations on hold for an upcoming summit in the Russian city of Sochi scheduled for June.