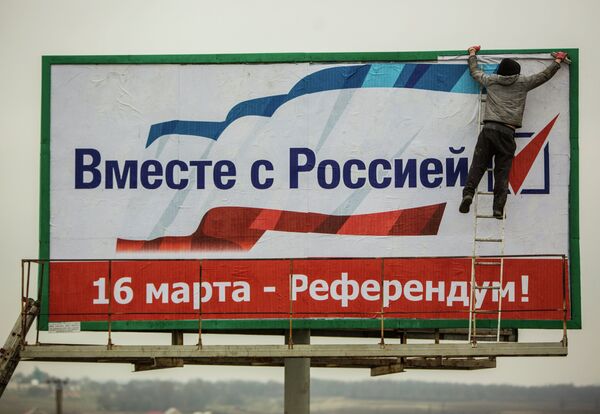 © RIA Novosti . Андрей Стенин
/
Go to the photo bank
Subscribe
Russia could absorb Crimea, currently part of Ukraine, in a matter of weeks after an upcoming referendum Sunday on secession, the head of the region’s parliament told RIA Novosti in an exclusive interview.

SIMFEROPOL, March 13 (RIA Novosti) – Russia could absorb Crimea, currently part of Ukraine, in a matter of weeks after an upcoming referendum Sunday on secession, the head of the region’s parliament told RIA Novosti in an exclusive interview.

The referendum in Crimea, where ethnic Russians make up about 60 percent of the population, is widely expected to return a favorable result that will pave the way for annexation by Moscow.

After the referendum, Russia’s lower and upper houses of parliament will hold a formal vote on whether to approve annexation, before Russian President Vladimir Putin gives his final backing.

“We believe here in Crimea that these three actions will take a maximum of two weeks, and by the end of this period we should have a constitution. We will send it for approval to the Russian Parliament,” said Volodymyr Konstantinov, the speaker of Crimea's parliament.

Crimea's parliament declared independence from Ukraine on Tuesday, adding in its statement that if the popular vote passes the country will become independent and will immediately request annexation by Moscow.

Konstantinov added that authorities in Crimea have already taken control of the region's Black Sea oil and gas fields, saying Russian companies including energy giant Gazprom should be involved in extracting the resources.

The move could foreshadow future disputes with energy-starved Ukraine, which also has territorial waters in the Black Sea.

“These fields and platforms will pass into the ownership of the Crimean Republic. We are already guarding them. These are our fields and we will fight for them,” he said.

Officials in Crimea, which hosts a major Russian naval base, have refused to recognize as legitimate the country’s new leadership that ousted President Viktor Yanukovych on February 22 following months of street demonstrations protesting his step back from closer ties with Europe.

Authorities in Kiev and international leaders have condemned the upcoming referendum as illegitimate and lashed out at the Kremlin for violating international law in attempting to annex the region.