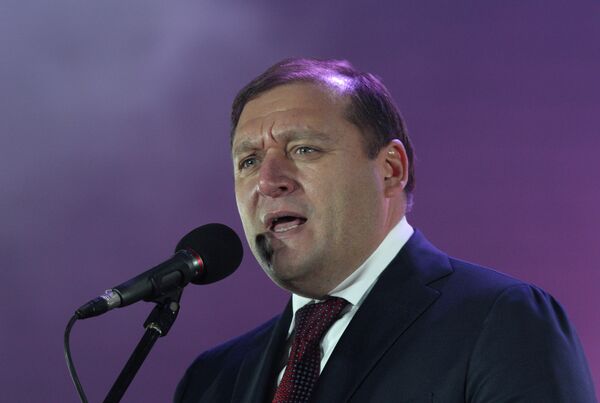 A Ukrainian politician who headed an eastern Russian-speaking region until earlier this month has been detained for inciting secession, prosecutors said.

SIMFEROPOL, March 11 (RIA Novosti) – A Ukrainian politician who headed an eastern Russian-speaking region until earlier this month has been detained for inciting secession, prosecutors said.

Mikhail Dobkin, who was removed from his post in the Kharkov Region on March 2 to run in the upcoming presidential election, could face up to five years in prison for “attacks on the territorial integrity and independence of Ukraine,” the Prosecutor General’s Office said in a statement.

The Public Television channel reported on Tuesday evening that a court in Kiev ruled to place him under house arrest. Dobkin said he would appeal the ruling.

The politician said that he still planned to run in the early presidential elections, scheduled for May 25, despite the legal proceedings.

The move signals a growing inclination by Ukraine’s new government to combat calls for the country’s eastern Russian-speaking regions to follow in the footsteps of Crimea, where a popular vote on secession and possible annexation by Russia is scheduled for Sunday.

Dobkin, who was detained on Monday in Kiev, was initially placed under investigation following comments he made at a roundtable on post-crisis Ukraine on February 12.

He also participated in an assembly of Russian-speaking regions held in the city of Kharkov, Ukraine’s second-largest city, where he spoke out against the interim authorities in Kiev following the ouster of pro-Russian President Viktor Yanukovych late last month.