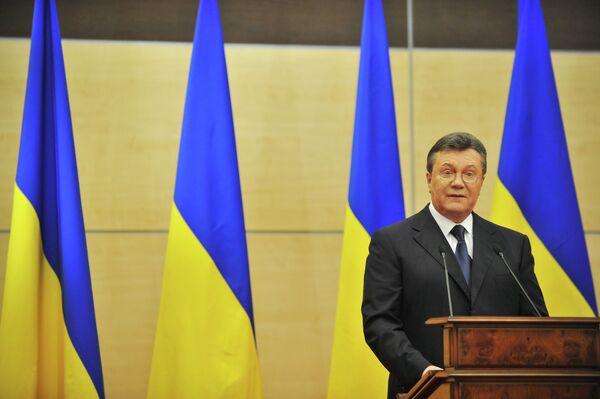 During a short address in the southern Russian city of Rostov-on-Don, Yanukovych insisted that he not only remains Ukraine’s president, but that he is also still the head of the armed forces.

Yanukovych last month fled the Ukrainian capital, Kiev, leaving a power vacuum quickly filled by opposition groups that had for months been protesting a government decision to back away from a proposed deal to bolster economic and political relations with the European Union.

The appearance follows persistent reports in Ukrainian media that Yanukovych had died of unspecified causes, speculation that he sought to stamp out in Tuesday’s statement.

“I would like to say that I'm alive and I feel good,” he said.

Yanukovych said that a presidential election planned to take place in Ukraine on May 25 would be “absolutely illegitimate,” and that any government formed as a result of the election would be illegal.

The exiled leader, who has said he is living with an “old friend” in Rostov-on-Don, criticized the United States for supplying the new government in Kiev with $1 billion of aid that he said even violated domestic US law.

“I want to ask the patrons of these dark forces in the west – have you been blinded, have you forgotten what fascism is?” Yanukovych asked.

“As far as I am aware, the laws of the United States forbid the provision of financial aid to any state where the legally elected president has been overthrown,” he said. “I intend to appeal to Congress, the Senate and the Constitutional Court.”

Yanukovych urged the international community to reject what he described as the unconstitutional coup that led to his flight.

"[Kiev] is being patrolled by masked men wearing armbands. There are growing outrages against the citizens of Ukraine,” he said. “They have fired top army officers, those who do not want to use the armed forces against the civilian population in the southeast of the country.”

Yanukovych also accused interim authorities of planning to give weapons to what he called “militant nationalist organizations.”

On February 22, Yanukovych was impeached by erstwhile protesters who took control of parliament and banded together with disaffected deputies from the ex-ruling Party of Regions.

The impeachment vote came one day after opposition parties signed an agreement with Yanukovych on a political settlement to form a unity government, call early elections and reform the constitution.

That proposed arrangement was superseded by events, however, when the opposition occupied the Verkhovna Rada, Ukraine’s parliament, as police disappeared from the center of Kiev.

Tuesday’s speech was Yanukovych’s second public appearance in Russia since he fled Kiev last month. Unlike his first press conference, which was also in Rostov-on-Don, Yanukovych did not take questions from reporters Tuesday.

He did not mention the situation in the southern Ukrainian peninsula of Crimea, which has been overrun by Russian troops in recent weeks ahead of a referendum on joining Russia scheduled for March 16.

Yanukovych said that he still has plans to go back to Ukraine.

“As soon as circumstances allow, I will definitely return to Kiev,” he said.