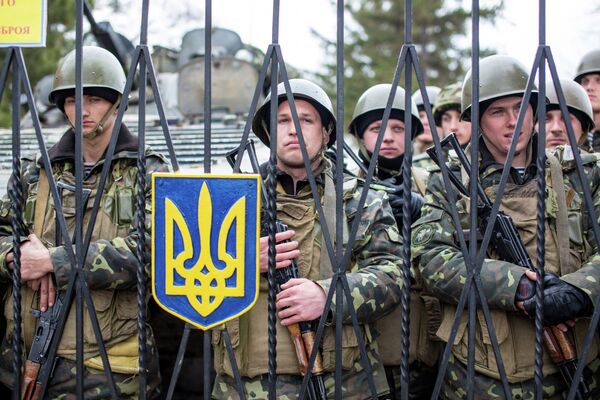 © RIA Novosti . Andrey Stenin
/
Go to the mediabank
Subscribe
International
India
Africa
The movement of troops in western Ukraine, reported by the country’s media, was held as part of military exercises and is not related to events in the breakaway region of Crimea, the acting defense minister said on Sunday.

MOSCOW, March 9 (RIA Novosti) – The movement of troops in western Ukraine, reported by the country’s media, was held as part of military exercises and is not related to events in the breakaway region of Crimea, the acting defense minister said on Sunday.

Crimea, the autonomous, largely pro-Russian republic, was taken over by thousands of troops without insignia widely believed to be the Russian military, though official Moscow denied involvement.

Ukrainian media reported over the weekend that eyewitnesses saw armored vehicles and military trucks leaving the western Ukrainian city of Lviv. The further whereabouts of the convoy remain unknown, prompting rumors it was possibly being prepared for deployment in Crimea.

"No maneuvers, no movements by the armed forces towards Crimea have ever been planned. The troops are carrying out their regular, scheduled duties,” Acting Defense Minister Ihor Tenyuh was quoted as saying by the UNIAN news agency.

Tenyuh said the personnel and vehicles traveled to military training grounds as part of large-scale exercises held in order to determine the combat readiness of the troops. Acting president will later submit a detailed report to the prime minister about the efficiency of the armed forces based on the results of these exercises.

The report came in the wake of a number of military exercises in Russia’s western regions in the past days, including air defense drills, combat readiness snap checks and a launch of an intercontinental ballistic missile. Russia denied the exercises were linked to the events in Crimea.

Crimean authorities, who refuse to recognize the legitimacy of the central government in Kiev, ruled out any contacts with the present leadership on Sunday. The Crimean parliament announced a decision to become a part of Russia on Thursday and a referendum on the issue is slated for March 16.