Deputy PM Says Russia Should Re-Arm Amid US, NATO ‘Threats’ 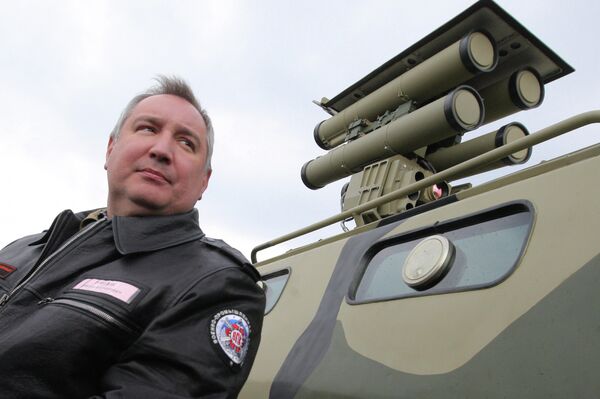 The Russian deputy prime minister in charge of defense said “overt threats” by the United States and NATO demonstrate the necessity of equipping the Russian army with modern weapons.

MOSCOW, March 9 (RIA Novosti) – The Russian deputy prime minister in charge of defense said “overt threats” by the United States and NATO demonstrate the necessity of equipping the Russian army with modern weapons.

“A hope that after the overt threats by the US and NATO nobody will doubt the necessity of rearming our army and fleet and of reviving our defense industry and military science,” Dmitry Rogozin wrote on his Facebook page on Saturday.

Another round of political standoff between Russia and the West was sparked by the recent uprising in Ukraine and the fate of Crimea, an autonomous Ukrainian region with a majority ethnic Russian population.

Crimean authorities have refused to recognize as legitimate the new central government in Kiev, which ousted President Viktor Yanukovych late last month, and on Thursday they announced a decision to become part of Russia.

Ukraine earlier appealed for assistance from NATO, asking the alliance to use all possible measures to ensure the country’s territorial integrity and protect its people following the approval by Russia’s parliament of the deployment of military forces in Ukraine.

Following these developments, the West showered Moscow with accusations of aggression and threats of sanctions while cutting off military exchanges with Russia and scrambling to bolster military cooperation within NATO.

The Pentagon announced plans on Wednesday to expand combat pilot training in Poland and to send six additional F-15C fighter jets to a NATO mission carrying out air patrols over Estonia, Latvia and Lithuania.

Russia has held a number of military exercises in its western regions in the past days, including air defense drills, combat readiness snap checks and a launch of an intercontinental ballistic missile.