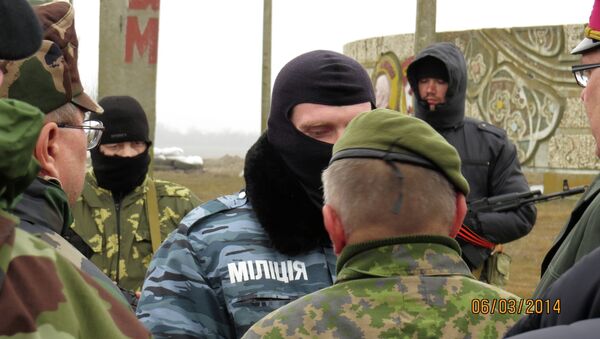 © Photo : OSCE
Subscribe
International
India
Africa
A mission of the Organization for Security and Co-operation in Europe (OSCE) was denied entry to Ukraine’s breakaway region of Crimea on Saturday.

MOSCOW, March 8 (RIA Novosti) – A mission of the Organization for Security and Co-operation in Europe (OSCE) was denied entry to Ukraine’s breakaway region of Crimea on Saturday.

Warning shots were fired after the military assessment team from OSCE states neared the checkpoint in the city of Armyansk, according to OSCE’s official Twitter account.

No injuries were reported. The observers returned to the nearby city of Kherson, the OSCE said.

This was the third attempt by the 54-strong OSCE mission to enter Crimea since Thursday.

The mission was invited by the central government in Kiev, installed last month after ousting of President Viktor Yanukovych following a protracted and bloody standoff between police and the opposition, including armed far-right groups.

Crimean authorities refused to recognize the new pro-Western government and announced plans to secede and join Russia, with a referendum on the matter set for March 16.

The autonomous, largely pro-Russian republic was taken over by thousands of troops without insignia widely believed to be the Russian military, though official Moscow denied involvement.