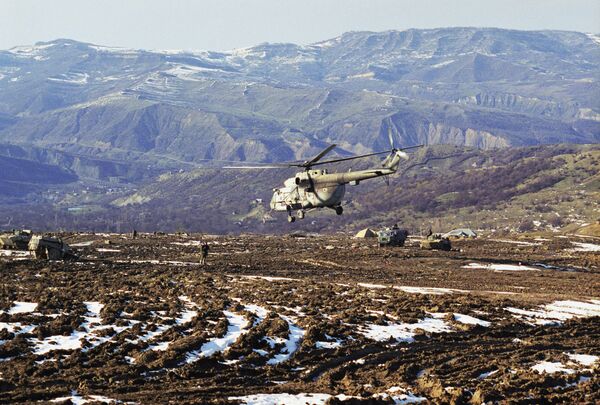 Russian investigators said Friday that they are opening a case against a prominent Ukrainian nationalist on suspicion of torturing and murdering at least 20 Russian servicemen during the conflict of the early 2000s in Chechnya.

MOSCOW, March 7 (RIA Novosti) – Russian investigators said Friday that they are opening a case against a prominent Ukrainian nationalist on suspicion of torturing and murdering at least 20 Russian servicemen during the conflict of the early 2000s in Chechnya.

Investigative Committee spokesman Vladimir Markin said that Alexander Muzychko, known better by his nom de guerre “Sashko Bily” (White Sasha), acted out his hatred for Russia through his actions in the Russian republic of Chechnya, which fought two wars for independence from Moscow in the last two decades.

“Muzychko brutally tortured prisoners of war among the Russian federal forces and then killed them. During the period under investigation, Muzychko personally tortured and then murdered at least 20 prisoners to extract the information he required,” Markin said.

Muzychko is a coordinator for Pravy Sektor (Right Sector), the radical far right opposition group that was responsible for some of the most violent opposition to police during the recent anti-government protests that have swept Ukraine.

Russia has come out strongly in recent days against the radical nationalist Ukrainians who were leading figures in the violent clashes that preceded the overthrow of ousted President Viktor Yanukovych.

Although most of those who took to the streets of the capital Kiev for anti-government protests during the last three months were peaceful, Russian state media has tried to cast the demonstrations as a predominantly Fascism-inspired movement.

Many prominent figures, however, particularly those involved in violent clashes with police, have long links with far-right groups espousing aggressively nationalistic and ultraconservative views.

In its statement Friday, the Investigative Committee said Muzychko broke soldiers’ fingers, gouged out their eyes, tore out their nails with pliers, slashed the throats of some and shot others.

The case is based on investigations into clashes in the Chechen village of Ulus-Kert in 2000 between Russian troops and rebels under the leadership of Chechen warlord Shamil Basayev and Saudi-born Islamist radical Ibn al-Khattab.