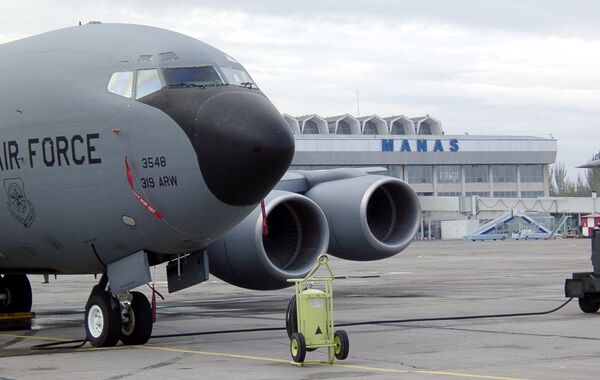 The commander of a US military air transit center in Kyrgyzstan said Thursday that the facility has performed its final mission, well ahead of its scheduled closure later this year.

BISHKEK, March 5 (RIA Novosti) – The commander of a US military air transit center in Kyrgyzstan said Thursday that the facility has performed its final mission, well ahead of its scheduled closure later this year.

Colonel John Millard said flights from the base for in-flight refueling and cargo and personnel transport in support of operations in Afghanistan had been completed. Remaining work will focus on clean-up and transferring the facility over to the Central Asian nation’s authorities by a July 11 deadline, Millard said.

According to official data, US tanker aircraft have flown more than 33,000 missions from Manas, refueling over 135,000 aircraft.

The center opened at Manas, which occupies a part of the territory of the capital city’s civilian airport, three months after the 9/11 attacks on the World Trade Center and Pentagon to support US-led coalition forces in the invasion of Afghanistan.

The presence of the transit center in Kyrgyzstan has long been a contentious political issue, with some blaming it for damaging the environment in the surrounding area. Officials at the base have denied those charges.

Conspiracy theories, typically promulgated by Kremlin-friendly Russian media, have also abounded about Manas being used as an electronic surveillance post or even a staging facility for drug trafficking.

Although Russia initially acquiesced to the presence of a US base in a nation traditionally considered to be within its sphere of influence, it has in recent years sought to pressure the Central Asian nation into suspending the center’s lease.

In 2011, Kyrgyzstan’s President Almazbek Atambayev announced his country would not renew an agreement to extend the lease of the facility.

Russia also maintains a military airbase outside the capital, Bishkek. The base was established in 2003 under the Moscow-led Collective Security Treaty Organization.

Russia and Kyrgyzstan signed an agreement in September to extend Russia’s lease of the facility to 2032.