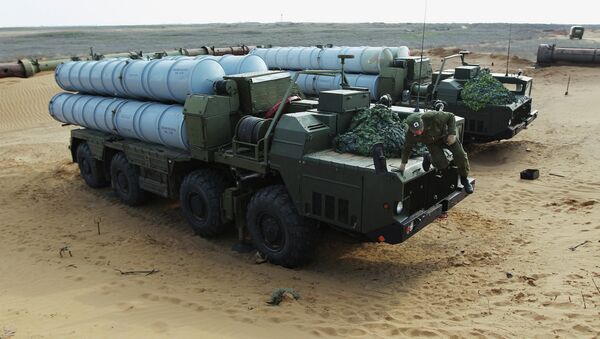 Russia’s Western Military District has begun large-scale air defense drills at its southern testing range of Kapustin Yar on the backdrop of further escalation of tensions with the West over Ukraine.

MOSCOW, March 6 (RIA Novosti) – Russia’s Western Military District has begun large-scale air defense drills at its southern testing range of Kapustin Yar on the backdrop of further escalation of tensions with the West over Ukraine.

Kapustin Yar, located some 450 kilometers (280 miles) east of the Ukrainian border, will host about 3,500 troops and over 1,000 units of military hardware for about a month. The exercise will culminate with live-firing drills, involving S-300, Buk-M1 and other air defense systems.

“It is for the first time that all air defense units from the district, including coastal defenses of the Northern Fleet, have gathered in one place,” said the district’s spokesman, Col. Oleg Kochetkov.

“It is the largest-ever exercise held by air defense units of the Western Military District,” Kochetkov said, adding that the drills were part of a regular combat training cycle.

The exercise, however, coincides with further escalation of a political crisis in Ukraine that has led to the current standoff between Russia and the West over the fate of Crimea, an autonomous Ukrainian region with a majority ethnic Russian population.

Crimean authorities have refused to recognize as legitimate the new central government in Kiev, which ousted President Viktor Yanukovych late last month, and on Thursday they announced a decision to become part of Russia.

A popular vote to approve the decision will be held in Crimea on March 16.

Russia’s parliament has recently approved military intervention in Ukraine, while thousands of “local militia” allegedly under Russian command have taken control over Ukrainian military bases across Crimea in the past week.

Following these developments, the West showered Moscow with accusations of aggression and threats of sanctions while cutting off military exchanges with Russia and scrambling to bolster military cooperation within NATO.

The Pentagon announced plans on Wednesday to expand combat pilot training in Poland and to send six additional F-15C fighter jets to a NATO mission carrying out air patrols over Estonia, Latvia and Lithuania.

Patrols have been carried out on a three- to four-month rotation basis by 14 NATO states from Lithuania’s air base in Zokniai, near the northern city of Siauliai, since 2004 when the ex-Soviet republics joined the alliance.

The Estonian military said Thursday that the six US fighter jets as well as two KC-135 aerial refueling tankers landed at Zokniai, joining four US F-15s deployed there since January.