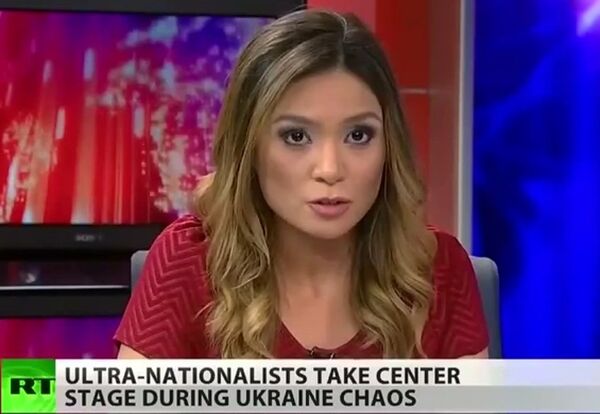 © Photo : YouTube screenshot
Subscribe
A US anchor at the Kremlin-funded TV news channel RT has resigned on air, saying the network “whitewashes” the actions of President Vladimir Putin.

MOSCOW, March 6 (RIA Novosti) – A US anchor at the Kremlin-funded TV news channel RT has resigned on air, saying the network “whitewashes” the actions of President Vladimir Putin.

Liz Wahl began the surprise announcement Wednesday by referring to Russia’s intervention in Crimea and saying that as a reporter on the RT network, she faced “many ethical and moral challenges.”

“I cannot be part of a network funded by the Russian government that whitewashes the actions of Putin,” she said. “I believe in disseminating the truth, and that is why, after this newscast, I’m resigning.”

RT condemned her public resignation in a statement as “nothing more than a self-promotional stunt.”

Wahl’s announcement came days after another RT presenter, Abby Martin, spoke out on air against Russian intervention in the Crimea, saying “what Russia did is wrong.”

RT said in a statement that Martin would be sent to Crimea “to give her an opportunity to make up her own mind from the epicenter of the story.”

RT editor-in-chief Margarita Simonyan responded to both presenters’ actions Thursday with a blog post on the website of Ekho Moskvy radio station.

Simonyan blamed pressure from other journalists, saying RT employees were constantly accused of distributing “Kremlin propaganda” and that not everyone could withstand such pressure.

She also suggested Wahl had been inspired to make the announcement after seeing how much publicity Martin’s speech had got.

RT broadcasts in several languages, including in English. Its coverage tacks closely to the Russian government positions, and content devoted to negative aspects of life in Western countries makes up a substantial part of its broadcasts.