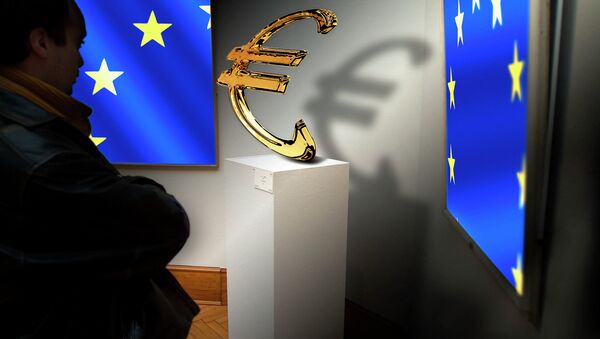 The European Commission announced Wednesday that it will provide Ukraine with 11 billion euros ($15 billion) in financial assistance to Ukraine, which is struggling to keep its crisis-hit economy afloat amid mounting debt.

BRUSSELS, March 5 (RIA Novosti) – The European Commission announced Wednesday that it will provide Ukraine with 11 billion euros ($15 billion) in financial assistance to Ukraine, which is struggling to keep its crisis-hit economy afloat amid mounting debt.

European Commission President Jose Manuel Barroso said the aid package was designed to enable “a committed, inclusive and reforms-oriented government in rebuilding a stable and prosperous future for Ukraine.”

The European Commission said in a statement that financial support would be provided over a two-year period from the EU budget and EU-based international financial institutions.

“The most immediate priority for the EU is to contribute to a peaceful solution to the current crisis, in full respect of international law,” Barroso said.

The statement said some aspects of the reform program would be carried out quickly, while others would require longer-term planning and preparation.

“Underpinning this approach is the ambition to help Ukraine fulfill the aspirations which have been clearly demonstrated by citizens and civil society in recent weeks in the unprecedented events in Kiev and throughout the country,” the statement said.

The European Commission statement came a day after the US pledged $1 billion to Kiev in loan guarantees.

Ukraine is on the brink of financial collapse and a Russian loan package for $15 billion agreed in December is in jeopardy after Ukraine’s pro-Russian president, Viktor Yanukovych, was ousted by violent protests last month.

Russia postponed the payment of the second tranche last month and said it was doubtful it could work with Ukraine’s new government, which it has described as illegitimate.

Kiev owes Moscow about $1.6 billion for gas deliveries, and Russian President Vladimir Putin said Tuesday that the figure will rise to $2 billion if Kiev is late with payment for February gas deliveries.

Large-scale street protests originally erupted in Ukraine after Yanukovych postponed the long-anticipated signing of trade and association agreements with the EU in November in favor of closer ties with Moscow and the Russian loan package.

The protests rapidly turned into general anti-government rallies that last month descended into bloody clashes between police and protesters in which nearly 100 people were killed, including almost 20 police officers.