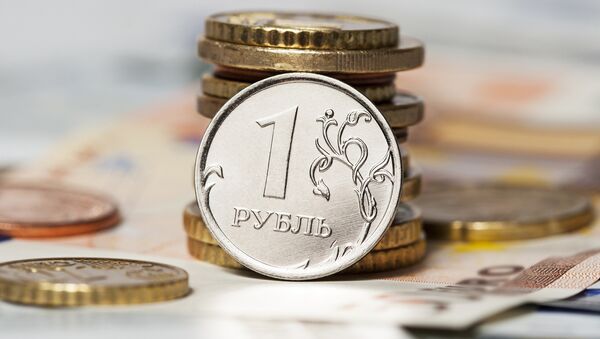 Such a crash was widely predicted by experts when Russia approved the use of military force in Ukraine on Saturday, prompting widespread condemnation from the international community.

Responding to what it described as “risks to financial stability,” the central bank increased interest rates by 1.5 percent in a surprise move Monday. The hike follows an 18-month period during which the regulator left interest rates unchanged.

Officials in the United States and Europe have told Russia that its actions in Ukraine could lead to possible economic sanctions and asset freezes.

The most dramatic losses were recorded in equities as a huge sell-off took hold, the size of which has not been seen since the financial crisis in 2008.

The MICEX bourse was down more than 11 percent by Monday afternoon trading, while the dollar-denominated RTS lost almost 13 percent.

Shares in state-owned gas giant Gazprom, which is considered particularly vulnerable to events in Ukraine because of its extensive pipeline system in the country, fell by almost 14 percent.

“[We are] understandably seeing sellers across the board,” one major US investment bank based in Moscow wrote in a note to clients Monday.

In one of the bluntest warnings of economic consequences for Moscow if it continues military action in Ukraine, US Secretary of State John Kerry told NBC’s “Meet the Press” show Sunday that the United States and some of its allies were “prepared to go to the hilt to isolate Russia.”

Plunging shares were accompanied by a falling ruble and a rush to sell in the bond market.

The dollar rose more than 50 kopeks to 36.35 rubles and the euro climbed 55 kopeks to 51.2 rubles in morning trading, according to data from the Moscow Exchange. The ruble, which has fallen steadily this year, is now at record lows against both the ruble and the dollar.

The declines brought the Russian currency to levels outside the trading corridor mandated by the central bank, causing the regulator to announce that it was widening the target band by 20 kopeks.

Monday’s falls compounded declines in recent days as the scale of Russia’s military incursion in the southern Ukrainian region of Crimea has grown clearer.

The MICEX Index lost 2.8 percent and the ruble declined 1.7 percent against the dollar during the last week.

“The market’s collapse is a vote of no confidence in [Russian President Vladimir] Putin,” former deputy central banker Sergei Aleksashenko wrote on Twitter on Monday.

“Russian business and its population are voting against the authorities’ recklessness.”

Updated throughout the day.