Ukrainian Troops in Crimea Side with Pro-Russia Forces 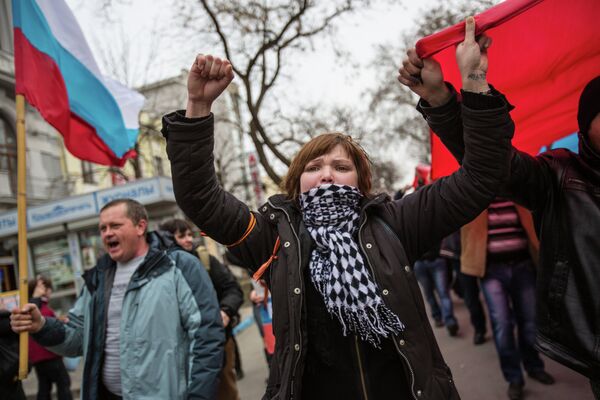 The Ukrainian Defense Ministry immediately denied the report, which was also circulated by other Russian media, calling it “a provocation.”

The ministry said in a statement that despite the attempts of “armed men” to take control of the military units stationed on the Crimean peninsula, their personnel refused to surrender and remained loyal to Kiev authorities.

Crimea, an autonomous republic within Ukraine, is now at the center of the ongoing crisis in the country as pro-Russia groups move to distance themselves from a reformed national parliament that ousted President Viktor Yanukovych a week ago.

Putin issued his request in response to what he said was a threat to the lives of Russian citizens and military forces located in naval bases in Crimea.

There is already a substantial Russian military presence in southern Ukraine, courtesy of the leased Black Sea Fleet naval base in the Crimean Peninsula.

Large movements of Russian troops have been reported around the peninsula, which is in defiance of express instructions from Ukrainian authorities this week for Russian soldiers to remain confined to their quarters.

Meanwhile, thousands of pro-Moscow protesters staged a number of rallies in eastern Ukraine on Saturday backing the anti-Kiev stance of the Crimean population and calling for Russia to defend them as well.

New authorities in Kiev have already responded to Russia’s plans by putting the army on high alert and calling up all military reserves.

Kiev has also appealed to NATO on Saturday" with a request to consider all options to defend the territorial integrity and sovereignty of Ukraine.”

Updates with Ukraine’s Defense Ministry denial of the report