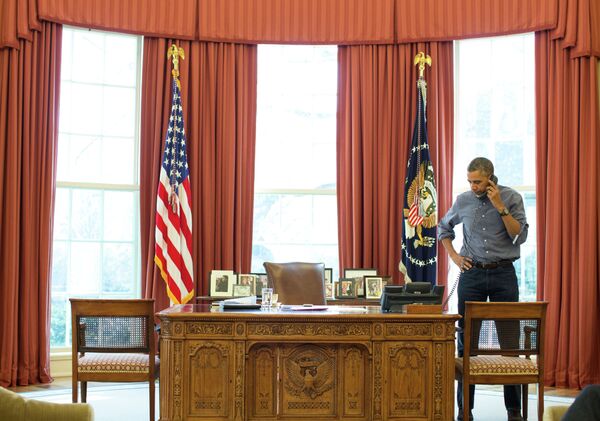 Russian leader Vladimir Putin told US President Barack Obama in a telephone conversation Sunday that Moscow reserved the right to protect its own interests and those of Russian speakers in the event of violence breaking out in eastern Ukraine and Crimea.

MOSCOW, March 2 (RIA Novosti) – Russian leader Vladimir Putin told US President Barack Obama in a telephone conversation Sunday that Moscow reserved the right to protect its own interests and those of Russian speakers in the event of violence breaking out in eastern Ukraine and Crimea.

The Kremlin press service said Putin responded to Obama’s expression of concern over possible Russian plans to deploy troops in Ukraine by drawing attention “to the provocative, criminal acts of ultranationalist elements being effectively encouraged by authorities in Kiev.”

Putin said that there was a real threat to the life of many Russians on Ukraine’s territory, the press service said.

Russia’s upper house of parliament voted Saturday to approve military action on Ukraine, citing the same motivations as those mentioned by Putin.

There is already a substantial Russian military presence in southern Ukraine, courtesy of the leased Black Sea Fleet naval base in the Crimean Peninsula.

Large movements of Russian troops have been reported around the peninsula, which is in defiance of express instructions from Ukrainian authorities this week for Russian soldiers to remain confined to their quarters.

In the 90-minute conversation with Putin, Obama condemned Russia’s military intervention, calling it a “clear violation of Ukrainian sovereignty and territorial integrity” and describing it as a breach of international law.

The US leader urged Russia to minimize tension by pulling back troops to bases in Crimea and refrain from any involvement in affairs anywhere else in Ukraine.

In a gesture aimed at signaling the degree of its distress over the course of events, the White House said it is suspending planned participation in preparatory meetings for a G-8 summit due to be held in June in the southern Russian city of Sochi, which last month hosted the Winter Olympics.

“Going forward, Russia’s continued violation of international law will lead to greater political and economic isolation,” the White House said in a read-out of the conversation between Obama and Putin.

Crimea is home to a large ethnic Russian community, which has reacted with alarm to what it sees as the aggressively nationalistic government that has taken hold since last month’s ouster of President Yanukovych. Eastern Ukraine, which was another political stronghold for Yanukovych, also has a substantial Russian-speaking population and saw many anti-government protests Saturday.

Obama said that the United States understood the need to protect the ethnic Russian minority in Ukraine and that it would push Kiev to ensure their rights weren’t hindered.

“The Ukrainian government has made clear its commitment to protect the rights of all Ukrainians and to abide by Ukraine’s international commitments, and we will continue to urge them to do so,” the White House said in the readout.

The head of the migration service’s citizenship department, Valentina Kazakova, said 143,000 people had applied for asylum in the last two weeks of February alone.

“People are afraid for the fate of those close to them and are asking not just for protection, but also to help them receive fast-tracked Russian citizenship,” Kazakova said. “A large number of applications are from members of Ukrainian law enforcement bodies and government officials fearing reprisals from radically disposed groups.”