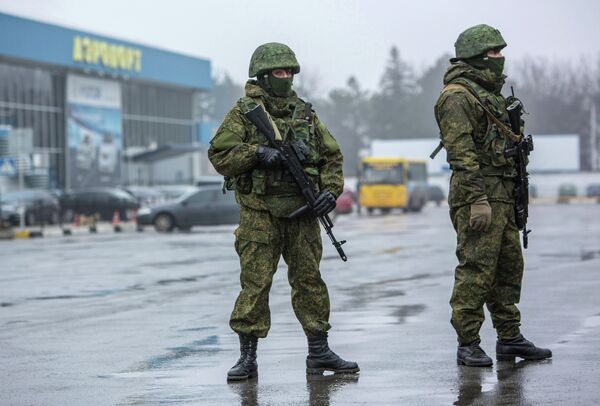 The interior minister of Ukraine accused Russian troops Friday of blockading an airport in the Crimean city of Sevastopol in what he has described as an armed invasion.

KIEV, February 28 (RIA Novosti) – The interior minister of Ukraine accused Russian troops Friday of blockading an airport in the Crimean city of Sevastopol in what he has described as an armed invasion.

While stressing that no direct violent confrontations had taken place, Arsen Avakov said the matter should be dealt with on a diplomatic level before armed clashes broke out.

Avakov said on his Facebook account that troops from the Black Sea Fleet, which is stationed in the city, could be seen outside Belbek airport, although the inside of the terminal was controlled by Ukrainian troops.

“The airport is not operating. At the external perimeter there are Ukrainian Interior Ministry checkpoints. There have been not been armed clashes,” Avakov said.

The alleged presence of Black Sea Fleet troops at the airport, if confirmed, would be in direct defiance of a demand by Ukrainian interim authorities Thursday for Russian troops to refrain from leaving their quarters. That appeal apparently echoed international concern that Moscow may choose to throw its weight behind pro-Russian groups in Crimea seeking to defy interim authorities in Kiev.

“Any movement, particularly with weapons, outside official residences regulated by our agreement will be interpreted by us as military aggression,” interim President Oleksandr Turchynov said.

Already frayed nerves on the Crimean Peninsula were tested Thursday when a group of apparently pro-Russian gunmen occupied the parliament in the Crimean regional capital of Simferopol, only one day after fistfights erupted outside the building between supporters and opponents of the country’s incoming leadership.

Russia, which has a substantial military presence at its leased naval base in Sevastopol, has insisted it will not interfere in its neighbor’s affairs, while at the same time voicing worries about possible discrimination against ethnic Russians in the country.

About half of Crimea’s population identifies as ethnic Russian.

Ousted President Viktor Yanukovych drew much of his support from Ukraine’s Russian population, which has reacted with alarm at what it perceives as an aggressively nationalistic rule now installed in Kiev.

In his statement Friday, Avakov said that 100 men that he said identified themselves as Cossacks attempted overnight Thursday to occupy the airport in Simferopol, which is 80 kilometers northeast of Sevastopol, but were repelled.

“The territory of the airport was vacated by the ‘Cossacks’ at one o’clock – they boarded covered Kamaz trucks and left,” he said.

He said that 119 armed soldiers in camouflage apparently belonging to the Russian armed forces arrived at the airport building at 1:30 a.m. and settled in an airport restaurant.

The soldiers refused to respond to queries from Interior Ministry officers about whether they were soldiers and if they had permission to be in the airport.

“I assess what is happening as an armed invasion and occupation. It is in violation of all international treaties and norms. This is a direct provocation to armed bloodshed on the territory of a sovereign state,” Avakov said.