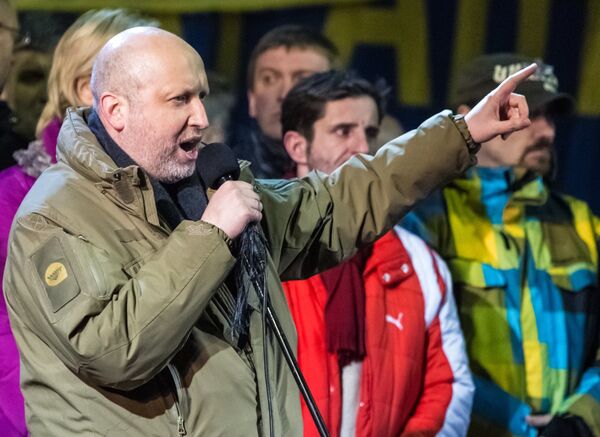 The interim president of Ukraine warned Thursday that any movement by Russian forces outside their bases in the southern republic of Crimea will be interpreted as an act of military aggression.

KIEV, February 27 (RIA Novosti) – The interim president of Ukraine warned Thursday that any movement by Russian forces outside their bases in the southern republic of Crimea will be interpreted as an act of military aggression.

Already frayed nerves on the peninsula reached breaking point after armed gunmen occupied the parliament Thursday in the Crimean town of Simferopol, only one day after fistfights erupted outside the building between supporters and opponents of the country’s incoming leadership.

Russia, which has a substantial military presence at its leased naval base in the Ukrainian Black Sea city of Sevastopol, has insisted it will not interfere in its neighbor’s affairs, while at the same time voicing worries about possible discrimination against ethnic Russians in the country.

About half of Crimea’s population identifies as ethnic Russian.

Interim President Oleksandr Turchynov appealed to Russian Black Sea servicemen to refrain from leaving their quarters, apparently echoing wider international concern that Moscow may choose to throw its weight behind pro-Russian groups in Crimea seeking to defy authorities in Kiev.

“Any movement, particularly with weapons, outside official residences regulated by our agreement will be interpreted by us as military aggression,” Turchynov said.

Russia maintains thousands of military personnel at bases in Sevastopol that it rents from Ukraine.

Eyewitnesses in central Sevastopol reported seeing Russian armored personnel carriers on Tuesday and there have been other unconfirmed reports of Russian troop movements around the city since the weekend.

Acting Ukrainian Interior Minister Arsen Avakov posted a link Thursday to an article on a Ukrainian news site reporting on a column of Russian APCs heading for Simferopol on a planned exercise being turned back by local law enforcement authorities.

Russia’s Foreign Ministry did not deny the reports about its heightened military activity in the region, but claimed that any movement of its troops was made in accordance with preexisting military agreements with Kiev.

“Movement of individual armored vehicles of the Black Sea Fleet was conducted in full accordance with basic agreements and did not require any approvals,” the ministry statement said.

In recent days, a series of pro-Russian demonstrations have taken place across Crimea. Protesters have said at those gatherings that they do not recognize the current government in Kiev and have called for Russian intervention.