US Mulls Loan to Ukraine, Warns Against Russian Intervention 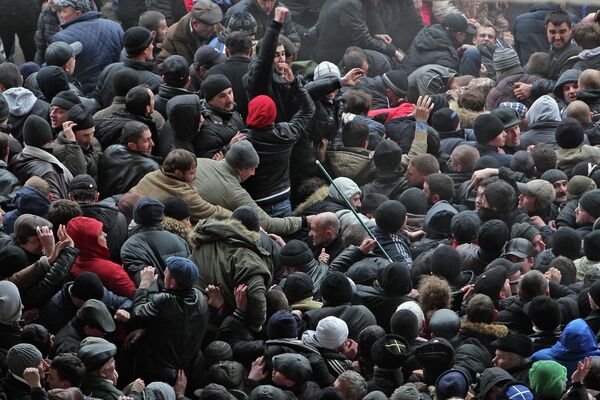 © RIA Novosti . Taras Litvinenko
/
Go to the mediabank
Subscribe
International
India
Africa
The United States has said it plans to provide Ukraine with $1 billion in loan guarantees and has warned Russia against military action in the former Soviet state as tensions simmer in the southern Ukrainian region of Crimea.

MOSCOW, February 27 (RIA Novosti) – The United States has said it plans to provide Ukraine with $1 billion in loan guarantees and has warned Russia against military action in the former Soviet state as tensions simmer in the southern Ukrainian region of Crimea.

The promise of support from Washington comes as newly installed leaders in Ukraine face the prospect of keeping a teetering economy on track and ensuring security amid challenges to their authority from opponents in the south and east of country.

Secretary of State John Kerry said that US support would come on top of an expected $1.5 billion worth of credits from the European Union and further loans from international financial organizations.

EU foreign affairs chief Catherine Ashton gave no details of the financial assistance, but said Brussels would work with the International Monetary Fund.

Meanwhile, Kommersant daily newspaper reported Thursday that the Economy Ministry in Moscow has reached out to Russian businessmen to invest more than $5 billion in the Ukrainian autonomous republic of Crimea, which is mainly occupied by ethnic Russians.

Russian businesses plan to invest some $1.4 billion on road reconstruction and $1.8 billion on projects related to sea ports, a Russian trade representative in Ukraine told the newspaper.

Nerves have been tested in the Black Sea peninsula since the ouster over the weekend of Ukrainian President Viktor Yanukovych, who had latterly chosen to direct the country toward greater economic cooperation with Russia.

Wariness among the ethnic Russian population has been fueled by perceptions of increasingly belligerent nationalist rhetoric among politicians in the opposition movement that spearheaded Yanukovych’s ouster.

Complicating matters, representatives of the ethnic Tatar community, who represent more than one-tenth of the population in Crimea, have come out in support of the incoming regime, setting the stage for tensions inside the peninsula.

Fighting broke out Wednesday in the Crimean city of Simferopol as large crowds of opponents of the newly installed national authorities faced off against representatives of the Tatar community outside the local parliament. Many among the ethnic Russian gathering waved flags of Russia and chanted the name of the country in an apparent appeal for assistance on their behalf.

At least two people died and another 30 people sought medical help after the clashes, the local health ministry said Thursday.

On Wednesday, Russia announced that it was holding snap combat readiness drills involving 150,000 combat troops in two military districts, including one abutting the Crimea, a development that has been widely interpreted as a reaction to a potential escalation of instability in Ukraine. Russian defense officials have denied the maneuver is connected to Ukraine.

Kerry said any kind of military intervention violating Ukraine territorial integrity would be a grave mistake.

"What we need now to do is not get into an old, Cold War confrontation," The Associated Press quoted Kerry as saying. "We need to work together in what does not have to be a zero-sum game to provide the capacity of the people of Ukraine to choose their future."

In an apparent acknowledgement of Moscow’s concerns for the Russian population in Ukraine, however, White House press secretary Jay Carney urged authorities in Kiev to protect the nation’s minorities.

“We call on Ukraine’s leaders to do their utmost to protect the security and human rights of all their citizens, including the rights of minorities, to recommit to honor the state’s international obligations, and to avoid divisive policies,” Carney said.