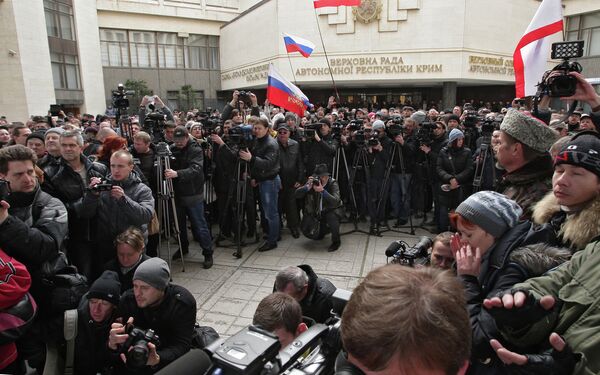 Scuffles broke out Wednesday in the southern Ukrainian city of Simferopol as large crowds of opponents of the newly installed national authorities faced off against representatives of the Crimean Tatar community outside the local parliament.

SIMFEROPOL, February 26 (RIA Novosti) – Scuffles broke out Wednesday in the southern Ukrainian city of Simferopol as large crowds of opponents of the newly installed national authorities faced off against representatives of the Crimean Tatar community outside the local parliament.

The rise to power of a group of politicians whose bulk of support is drawn from the more nationalist-leaning Western Ukraine has ignited alarm among ethnic Russians in the south and east of the country.

Complicating matters, Tatar representatives have come out in support of the incoming regime, setting the stage for tensions inside the Crimean Peninsula.

Police forces appeared to be having trouble controlling the crowd, and a RIA Novosti reporter saw people who seemed to have been involved in a brawl with bloodied faces.

An online live feed from the spot showed dozens of people waving Ukraine’s national blue-and-yellow flag as well as the tricolor of the autonomous Crimea republic and the standard of the Crimean Tatar people, which is electric blue with a yellow seal in the top left corner.

Developments on the ground will be monitored closely by neighboring Russia, which has spoken forcefully about the need to protect the interests of ethnic Russians in Ukraine. Moscow has reacted with concern to proposals under consideration in Ukraine’s parliament that would severely downgrade the status of the Russian language.

In Simferopol on Wednesday, different parts of the crowd at the Crimean Supreme Council, the regional parliament, competed to drown out one another with cries of “Ukraine” and “Russia.”

A sit-in outside the building began Tuesday amid calls for local authorities to reject the rule of the erstwhile opposition, which has taken hold in Kiev since the ouster of President Viktor Yanukovych over the weekend.

People at the sit-in have demanded the restoration of Crimea’s 1992 constitution, which envisioned the republic as having its own president and autonomously determining its foreign policy.

Protesters have also called for a referendum on whether to persist with Crimea’s current status as an autonomous republic or seek integration with neighboring Russia.

Crimea has long-standing ties with Russia.

During the tenure of President Viktor Yanukovych, which began in early 2010 and ended with his ouster on Saturday, Ukraine renewed Russia’s lease on the naval base in the port city of Sevastopol until 2042, cementing what was already a strong economic link between Moscow and the region.