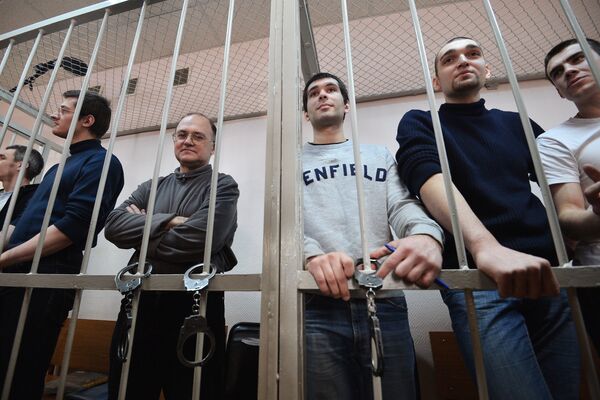 © RIA Novosti . Ramil Sitdikov
/
Go to the photo bank
Subscribe
A court in Moscow jailed seven opposition activists for up to four years Monday for their involvement in an anti-Kremlin protest that ended in violent clashes with police.

MOSCOW, February 24 (RIA Novosti) – A court in Moscow jailed seven opposition activists for up to four years Monday for their involvement in an anti-Kremlin protest that ended in violent clashes with police.

The activists were sentenced for participating in rioting and violence at the rally in Moscow’s Bolotnaya Square in May 2012, a day before Vladimir Putin was sworn in for a third term as president.

They had denied the charges but were convicted on Friday. Opposition activists have accused the police of instigating the violence at the demonstration.

The sentences read out in court for seven defendants ranged from two and half to four years of imprisonment.

An eighth activist, Alexandra Dukhanina, who was the only woman on trial, was sentenced to probation despite a request from prosecutors for a jail term of six years.

Police outside the court broke up a protest by supporters of the convicted activists and detained more than 100 people for disturbing the peace. 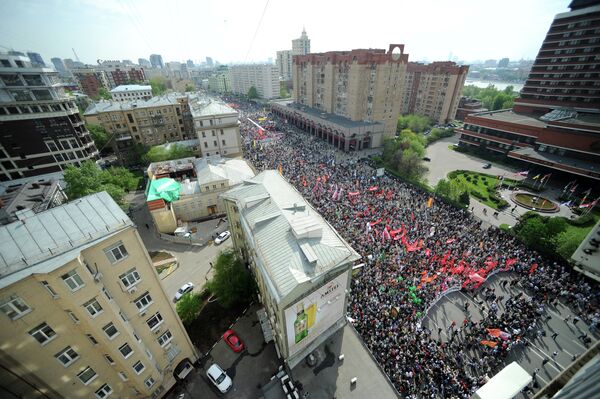 Journalist Simon Ostrovsky posted on his twitter feed that demonstrators were chanting “out with the gang” in Ukrainian, a reference to the otherthrow of the regime of President Viktor Yanukovych in Ukraine last week. The parliament in Kiev voted on Saturday formally to remove Yanukovych from power after fighting between riot police and protesters that killed around 100 people.

Opposition activists in Moscow alleged that sentencing of the Bolotnaya protesters was delayed until after the weekend to avoid tarnishing the closing ceremony of the Sochi Olympics on Sunday with political and media controversy.

State prosecutors had recommended at least five years imprisonment for all of the defendants.

A US State Department spokesperson said Friday that the convictions pointed to serious concerns about due process and the rule of law in Russia.

The 2012 demonstration was one of several large-scale street rallies in Moscow and other Russian cities that had taken place since December 2011 to oppose Putin’s return to the presidency.

Around 650 people were detained following clashes with the police at the rally. Criminal charges were brought against 27 people, but some were dropped before sentencing following a presidential amnesty announced in December last year.