Medvedev Raises Doubts on Legitimacy of New Powers in Ukraine 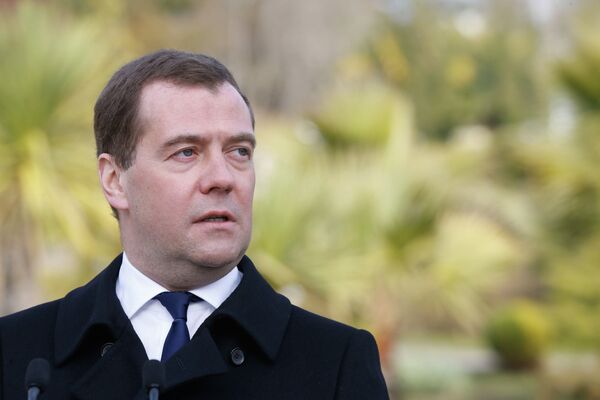 Medvedev attacked the swift recognition of the new authorities in Kiev by a number of Western governments, describing the regime as the unconstitutional outcome of an armed uprising.

“Strictly speaking, there is nobody to speak with over there. The legitimacy of a whole range of organs of power working there raises substantial doubts,” Medvedev said.

“Some of our foreign partners think otherwise. I don’t know what constitution they have read, but it is something of an aberration of consciousness when you describe as legitimate something that is the result of an armed uprising.”

Moscow has scrambled to formulate a clear diplomatic position on the ousting of Ukrainian President Viktor Yanukovych, who was notable for his pro-Russian positions, following days of deadly clashes between police and anti-government protestors in Kiev that left nearly 100 dead.

President Vladimir Putin has yet to make any public pronouncements on the change of government in Ukraine.

Medvedev said that Russia would adhere to all existing agreements with Ukraine, including those on energy.

“We do not co-operate with a specific set of people, or specific personalities, these are interstate relations. We are neighbors, we are nearby states and we cannot get away from one another,” he said.

Ukraine’s acting energy minister told Reuters news agency on Monday that he hoped the price it pays for Russian natural gas imports would remain unchanged despite the change of government.

Russian state gas giant Gazprom agreed with Ukraine’s Naftogaz in December to slash the price that Ukraine had paid since 2009 by about one-third, from about $400 per 1,000 cubic meters to $268.50.

This followed Yanukovych’s rejection of an association agreement with the European Union in November in favor of closer ties with Moscow, the event that triggered the street protests in Kiev.

More than half of the 55 billion cubic meters of natural gas consumed by Ukraine each year comes from Russia, according to Reuters.

Deputies in Ukraine’s parliament have voted impeach Yanukovych, whose whereabouts are unknown. A new presidential election is scheduled for May 25.