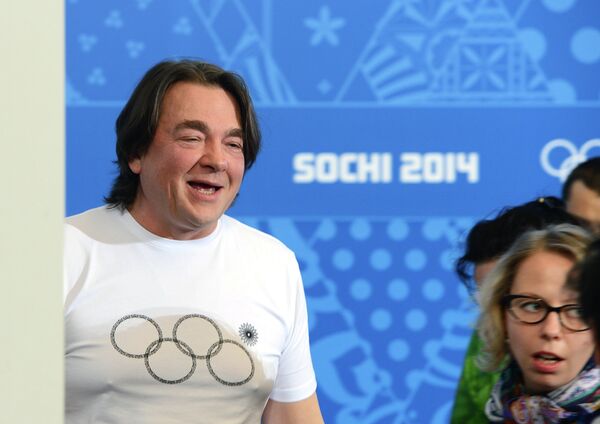 The ceremony, which starts at 20:14 local time (16:14 GMT), will be directed by Italy's screenwriter Daniele Finzi Pasca. Russian violinist Yuri Bashmet and conductor Valery Gergiev will perform at the event, ending the 17-day-long sports marathon.

“We wanted a look at the Russian culture from outside, through the eyes of a European,” said Konstantin Ernst, creative director of the Sochi Olympics' opening and closing ceremonies, commenting on the decision to recruit Pasca.

While the opening ceremony, which offered a sweeping overview of Russian history in 18 parts, was like a “blockbuster” production, Sunday’s event will be a low-key "art house" production, dedicated to Russian culture and reflecting sadness over the Olympics ending, Ernst said.

Ernst was met with applause and laughter at the press conference, as he took off his jumper and revealed a white-T-shirt with the four Olympic rings and a snowflake which failed to turn into the fifth ring.

At the opening ceremony in Sochi three weeks ago, one of the Olympic rings failed to illuminate fully and Russian host broadcaster, Rossiya 1, used rehearsal footage to conceal the glitch.

Ahead of the event, Ernst said the closing ceremony will remind of the 1980 Summer Olympic Games in Moscow, when Misha the bear, Games mascot turned into giant balloon.

In the unofficial medal count, Russia took over the top spot as Russian skiers occupied all places on the podium in the cross-country skiing 50km freestyle race on the final day of the Games.