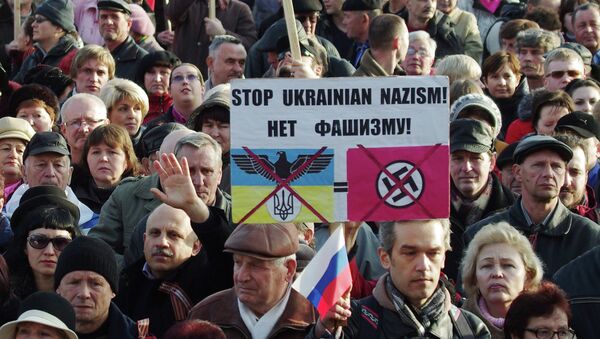 A senior US official on Sunday warned Moscow not to send troops into Ukraine amid the political crisis gripping Russia’s ex-Soviet neighbor, saying such a move would constitute a “grave mistake.”

WASHINGTON, February 23 (RIA Novosti) – A senior US official on Sunday warned Moscow not to send troops into Ukraine amid the political crisis gripping Russia’s ex-Soviet neighbor, saying such a move would constitute a “grave mistake.”

“It’s not in the interests of Ukrainian or of Russia or of Europe or the United States to see the country split. It’s in nobody’s interest to see violence returned and the situation escalate,” White House National Security Adviser Susan Rice said in an interview with NBC’s “Meet the Press."

Rice’s comments followed a report by the Financial Times last week quoting an unidentified senior Russian official as saying that Moscow could intervene to protect ethnic Russians in Ukraine’s Crimea territory, home to a Russian naval base.

“If Ukraine breaks apart, it will trigger a war. They will lose Crimea first [because] we will go in and protect [it], just as we did in Georgia,” the official was quoted as saying in a reference to Russia’s 2008 war with Georgia over the breakaway republic of South Ossetia.

Rice said in Sunday’s interview that the situation in Ukraine “is not about the US and Russia” and that closer Ukrainian ties with Europe would not come at the expense of the country’s historical links with Russia.

“There is not an inherent contradiction … between a Ukraine that has longstanding historic and cultural ties to Russia and a modern Ukraine that wants to integrate more closely with Europe,” she said.

Ukrainian President Viktor Yanukovych on Saturday abandoned his lavish estate in the wake of bloody street clashes between security forces and anti-government protesters last week that evaporated his authority in the capital Kiev and broad swathes of the country.

Ukrainian lawmakers impeached Yanukovych on Saturday, though he remained defiant in a statement issued the same day from a location in his political stronghold in the east of the country, describing attempts to unseat him as a coup.

Rice said that Russian President Vladimir Putin agreed with a message delivered by his American counterpart, Barack Obama, in a phone call between the two leaders Friday.

“The president’s message was, look, we have a shared interest in a Ukraine that remains unified, whole, independent and is able to exercise the will of its people freely,” she said.

In a telephone call with Russian Foreign Minister Sergei Lavrov on Sunday, US Secretary of State John Kerry expressed the United States’ “strong support” for the Ukrainian parliament’s decision to transfer presidential duties to speaker Oleksander Turchinov, the State Department said in a statement.

Kerry also “underscored the United States’ expectation that Ukraine’s sovereignty, territorial integrity and democratic freedom of choice will be respected by all states,” the State Department said.

Lavrov told Kerry, meanwhile, that the Ukrainian opposition has “effectively seized power,” refuses to lay down arms and “continues to place its stake on violence,” the Russian Foreign Ministry said in a statement.

Lavrov emphasized to his US counterpart that an agreement signed Friday between Yanukovych and Ukrainian opposition leaders calling for early presidential elections and constitutional reforms must be enforced, noting that the United States welcomed the deal at the time.