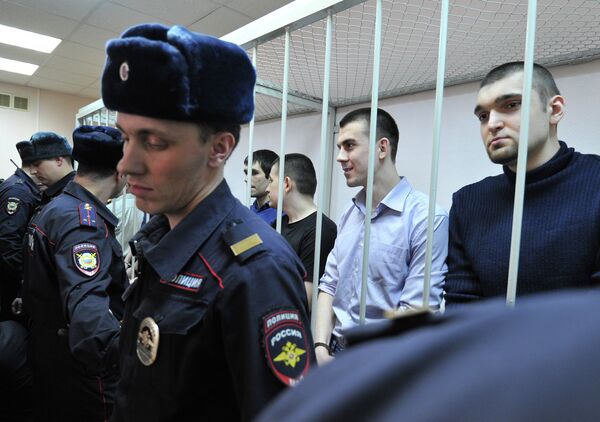 © RIA Novosti . Sergei Kuznetsov
/
Go to the photo bank
Subscribe
The United States on Friday expressed concern over the conviction of eight Russian opposition activists on charges of rioting and assaulting police in a 2012 anti-Kremlin rally, criticizing “ongoing pressure on civil society in Russia.”

WASHINGTON, February 21 (RIA Novosti) – The United States on Friday expressed concern over the conviction of eight Russian opposition activists on charges of rioting and assaulting police in a 2012 anti-Kremlin rally, criticizing “ongoing pressure on civil society in Russia.”

The guilty verdicts handed down by a Moscow court Friday were the result of a “politically motivated trial that points to serious concerns about due process and rule of law in Russia,” US State Department spokeswoman Marie Harf said in a statement.

“The United States continues to support the rights of all Russian citizens to exercise their fundamental freedoms, regardless of their political views,” Harf said.

Friday’s convictions stem from a May 6, 2012, protest on the central Bolotnaya Square that saw clashes between police and demonstrators. The rally was one of several large-scale street protests against Russian President Vladimir Putin’s return to the presidency that were held in Moscow and other Russian cities in 2011-2013

Sentencing was postponed until Monday, the day after the closing ceremony of the Sochi Olympics. Two opposition leaders face up to 6 years in prison, while prosecutors have requested sentences of at least five years for the other six defendants.

In her statement Friday, Harf cited “numerous prosecutions of activists, journalists and opposition politicians since 2012” as examples of what Washington sees as a crackdown on political freedoms in Russia.

She singled out the case of Russian environmental activist Yevgeniy Vitishko, who was handed a three-year prison term earlier this month in a case condemned by observers as politically motivated.

Russia has routinely rejected allegations by US and European officials that it uses its criminal justice system to punish critics and has repeatedly accused Western governments of meddling in its domestic affairs.