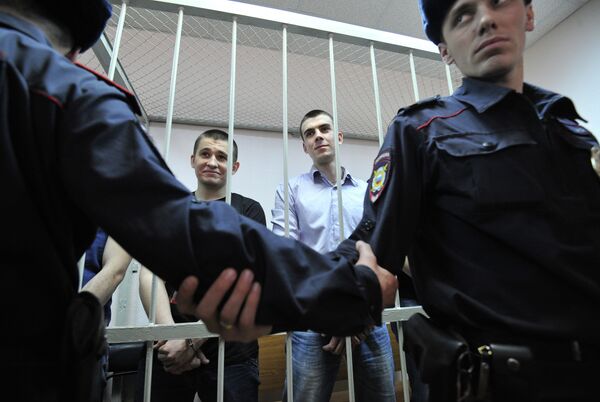 © RIA Novosti . Sergei Kuznetsov
/
Go to the mediabank
Subscribe
International
India
Africa
A court in Moscow found eight opposition activists guilty Friday of rioting and using violence against authorities in a 2012 anti-Kremlin rally in a high-profile case that has aroused concerns of increased repression against anti-government groups.

MOSCOW, February 21 (RIA Novosti) – A court in Moscow found eight opposition activists guilty Friday of rioting and using violence against authorities in a 2012 anti-Kremlin rally in a high-profile case that has aroused concerns of increased repression against anti-government groups.

Ahead of the verdict, riot police outside the courtroom dragged away hundreds of the defendants’ supporters in chaotic and rowdy scenes.

Sentencing in the case was postponed until Monday, the day after the closing ceremony of the Sochi Olympics. Opposition leaders alleged the delay was to spare the ceremony negative media backlash.

Two activists, anarchist Alexandra Dukhanina, 20, and Sergei Krivov of the liberal party PARNAS, 52, face up to six years in prison over a rally held on Moscow’s Bolotnaya Square on the eve of President Vladimir Putin’s inauguration for a third term. Prosecutors have asked for sentences of 5 1/2 years for five other defendants, and five for the remaining one – less than the others because he has an underage child.

Moscow police said about 200 people had been detained near Zamoskvoretsky District Court for “disturbing the public peace.”

The opposition earlier said it would hold an unsanctioned rally on Manezh Square outside the Kremlin in case of a guilty verdict. Riot police and water cannons were deployed in and around the square ahead of the rally’s start at 7 p.m., according to Twitter reports from eyewitnesses.

Among those detained outside were two people who were earlier suspects in the same case before they were amnestied at the end of last year, as well as a man taken into custody for waving a Russian flag, according to live video feeds from outside the courtroom.

Between 500 and 1,000 people gathered near the court Friday, chanting “freedom.”

At least 77 people died in Kiev this week in clashes between police offers and anti-government protesters.

Russian opposition leaders had repeatedly said that the Kremlin would likely make an example of the Moscow activists to send a warning to others, particularly in light of current events in Kiev.

A series of large-scale street protests against Putin’s return to the presidency took place in Moscow and other Russian cities in 2011-2013.

The protests were largely peaceful, with the exception of an event on the central Bolotnaya Square on May 6, 2012, where protest goers and police clashed as the rally got under way.

Police accused leftist leaders of instigating the clashes, while the opposition says the police mishandled and provoked the crowd, possibly deliberately.

About 650 people were briefly detained on Bolotnaya. Twenty-seven faced criminal prosecution, though some were cleared by a presidential amnesty approved last year, before their trials had reached sentencing.

The story was updated throughout the day.