Ukrainian Police Authorized to Use Live Ammo as Battle Rages 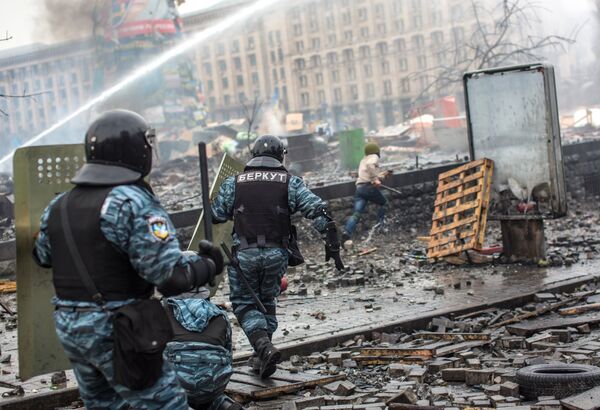 Ukraine’s Interior Minister confirmed Thursday he had signed a decree to issue service firearms to police officers and authorized the use of live ammunition.

KIEV, February 20 (RIA Novosti) – Ukraine’s Interior Minister confirmed Thursday he had signed a decree to issue service firearms to police officers and authorized the use of live ammunition.

The statement came in the wake of numerous reports from Kiev of both anti-government protesters and police officers being shot dead in ongoing clashes, in which at least 50 people have reportedly been killed.

Until this week, Ukrainian riot police had been using non-lethal weapons, such as tear gas, water cannons and rubber bullets, against protesters in street demonstrations that have been taking place around Ukraine since November.

“Law enforcement officers have received service firearms and will use them in accordance with Ukraine’s law on police,” Vitaly Zakharchenko said in a statement posted on the ministry’s website.

“The Interior Ministry demands that extremists hand over their weapons and return to peaceful protests. Those opposition leaders and activists who are capable of soberly evaluating the situation should dissociate themselves from the radicals and refrain from supporting them in future,” the statement reads.

At least 10 police officers have been killed in the clashes, the authorities said Thursday. Most of the officers killed reportedly also bore gunshot wounds.