New Russian Space Rocket on Track for Launch by June 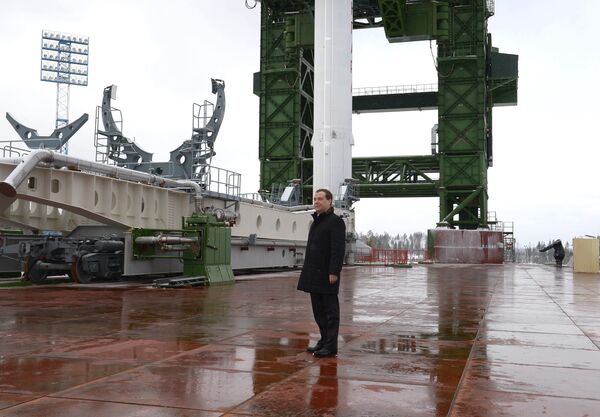 © RIA Novosti . Alexander Astafiev
/
Go to the mediabank
Subscribe
International
India
Africa
Russia’s first large rocket since the Soviet era is on track for a maiden launch this year and will be competitive with foreign rivals, Prime Minister Dmitry Medvedev said Wednesday.

MOSCOW, February 19 (RIA Novosti) – Russia’s first large rocket since the Soviet era is on track for a maiden launch this year and will be competitive with foreign rivals, Prime Minister Dmitry Medvedev said Wednesday.

“The rocket has been designed and produced entirely by domestic companies and uses environmentally-friendly propellants,” Medvedev said during a tour of Russia’s northern Plesetsk space center.

He noted that the Angara rocket was a great achievement for Russia’s aerospace industry, one that would secure access to space in the future for both government and civilian payloads.

It was on track for a test mission in the second quarter of 2014. A full-scale mockup of the rocket was rolled out to a launch pad earlier this week to check ground support systems.

The Angara is planned to launch from both Plesetsk and the new Vostochny space center in Russia’s Far East that is being built to reduce reliance on the Baikonur launch facility in Kazakhstan.

The modular launcher will have a variety of configurations to cover a wide range of payload weights, from two to 24.5 metric tons. They are currently served by several different rockets, including the Proton, Russia’s largest booster.

The environmental impact of the Proton’s toxic fuel has periodically tested relations with Kazakhstan, which leases Baikonur, its only launch site, to Russia.

Medvedev noted that the new rocket will be the second in as many years for the country, following the December launch of a new variant of the venerable Soyuz booster, the Soyuz-2.1v.