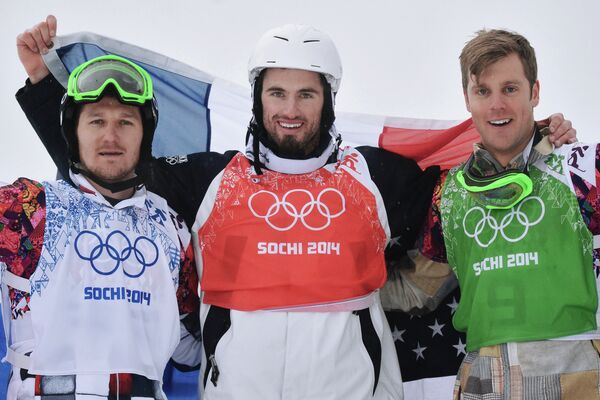 © RIA Novosti . Ramil Sitdikov
/
Go to the photo bank
Subscribe
France’s Pierre Vaultier won a duel with Russia’s Nikolai Olyunin in Olympic men’s snowboard cross Tuesday after the favorites for the gold medal went out of the competition early on.

ROSA KHUTOR, Russia, February 18 (R-Sport) – France’s Pierre Vaultier won a duel with Russia’s Nikolai Olyunin in Olympic men’s snowboard cross Tuesday after the favorites for the gold medal went out of the competition early on.

Vaultier took the lead early and repeatedly blocked the faster Russian from overtaking in a dramatic final amid thickening fog, a problem that caused the event to be moved from its original start date Monday.

The bronze medal went to Alex Deibold of the United States, who fell behind but came back to take third place from France’s Paul-Henri de la Rue toward the end of the course.

Vaultier's win comes as something of a surprise, as the Frenchman, a professional soldier, had not won a major honor since being named 2007-08 snowboard cross World Cup champion. Silver medalist Olyunin has previously said the Olympics would be his last major competition before he goes into business with a friend.

"I don't understand anything, to be honest," Olyunin said. "I just want to meet up with my family."

Deibold worked as a wax technician for more successful U.S. teammates at the 2010 Olympics after failing to qualify, and went through a series of battles to qualify for Sochi.

"Over the last four years, I've had some surgeries and some low points," Deibold added. "All that sacrifice and hard work doesn't seem like a damn thing."

Several big names failed to make much impression on the competition, chief among them seven-time X-Games champion Nate Holland of the United States, who went out in the first round, finishing fourth in his heat.

Among the others who fell at the first hurdle were US medal contender Nick Baumgartner and Austria’s Markus Schairer, a former world champion.

Italian Omar Visintin required extensive medical help after appearing to hit his head in a four-man crash in one of the semifinals. Lying immobile on the slope, he was attended for around 15 minutes by medical staff and carried away.

Visintin’s father told R-Sport that his son had been left with a leg injury.

“They told me [he was OK], but I’m not really sure,” Gabriele Visintin said. “They said it is something with his leg.”

Visintin is the 2009 world junior champion in snowboardcross and has enjoyed a strong season so far, with one win and three more podium finishes in World Cup events.

The Sochi course for snowboard cross and skicross is extremely fast with large jumps and has seen several injuries, some serious.

Russian skier Maria Komissarova broke her back in a training crash Saturday, and US snowboarder Jacqueline Hernandez was knocked unconscious during the women’s competition Sunday.