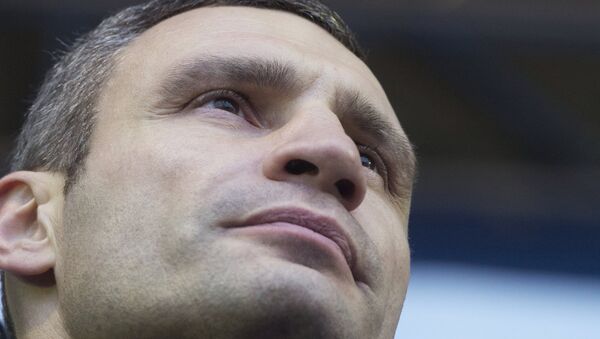 © Sputnik / Iliya Pitalev
/
Go to the photo bank
Subscribe
Ukraine’s boxer-turned-opposition politician Vitali Klitschko said Sunday he has given up his residency in Germany to prove his right to run for the president next year.

MOSCOW, February 16 (RIA Novosti) – Ukraine’s boxer-turned-opposition politician Vitali Klitschko said Sunday he has given up his residency in Germany to prove his right to run for the president next year.

The leader of the Udar political party, Klitschko, 42, has spent several years living and paying tax in Germany rather than Ukraine. Last year, the world heavyweight champion gave up his WBC title in order to focus on politics in Ukraine.

In November, Ukraine’s President Viktor Yanukovych signed into law legislation stipulating that a permanent resident in a foreign country could not be considered a resident of Ukraine.

Under the legislation, candidates for presidency must have been resident in Ukraine for the 10 years preceding the ballot.

Klitschko, who will have been living in Ukraine for nearly 8 years by election in 2015, could be directly hit by the law.

The former boxer announced his presidential bid in late October when the Ukrainian parliament passed the legislation.

“Yes, in fact I had a residence permit in Europe. Today I have no such a right. I have been a citizen of Ukraine since it proclaimed independence and I am its citizen today,” the UNIAN news agency said.

Klitschko has been at the forefront of protests in Kiev that erupted after Yanukovych rejected an association agreement with the EU in November, and instead signed a deal for Ukraine to receive $15 billion in aid from Russia.