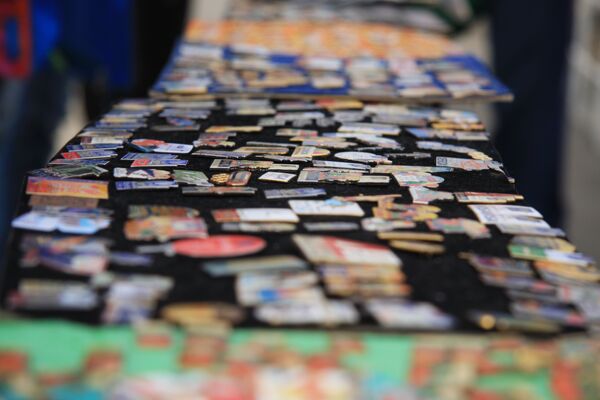 Douglas Todd has traveled from California to be at the Winter Olympics, but he is not interested in sports.

SOCHI, February 14 (Howard Amos, RIA Novosti) – Douglas Todd has traveled from California to be at the Winter Olympics, but he is not interested in sports.

The 52-year-old doctor has come to Sochi – like he has come to all the Games since 1984 – to trade lapel pins, the small commemorative badges given out to athletes, journalists and company representatives.

Todd said he’s brought about 28 pounds (12.7 kilograms) of pins with him this year, but he has no idea of the total number in his collection.

“I stopped counting when I had 5,000, but that was 15 years ago,” he said, as he stood near the entrance to the Olympic Park wearing a white waistcoat covered in his wares, periodically shouting out “want to exchange?” to passers-by.

Russia has a long tradition of pin trading, but traders in Sochi said some regulars had decided not to come this year because of travel difficulties and fears over security.

“It’s just above Iran and it’s hard to get to,” said John Duick, a construction worker from Vancouver attending his fifth Olympics as a pin trader. 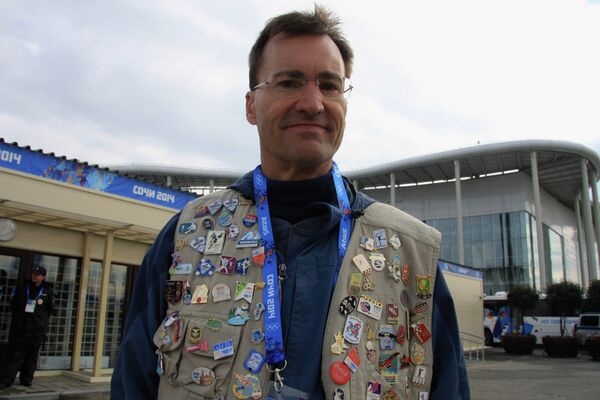 Few appeared to mourn the absence of their colleagues, however, because fewer traders mean easier pickings.

Pin traders fall into two categories: those seeking to earn some money, and purists for whom the passion is in the process of collecting. Purists tend to frown on those who buy and sell.

“For me it’s a hobby, it’s not a business,” said Duick. “If you just want to make money, that’s not right.”

The police are also alert to money changing hands for pins, traders said, and will act against those buying and selling without the required license.

Casual observance of pin traders in Sochi did not reveal any commercial transactions, but some traders admitted it did happen.

Another trader showed a Sochi 2014 pin produced by Japanese television company Nippon, and said it was worth between $50 and $100.

Pins from the Sochi Olympics are already available to buy on Internet site eBay, with prices varying from $35 for a US Luge Team pin to $8.50 for one with the NBC news channel logo. 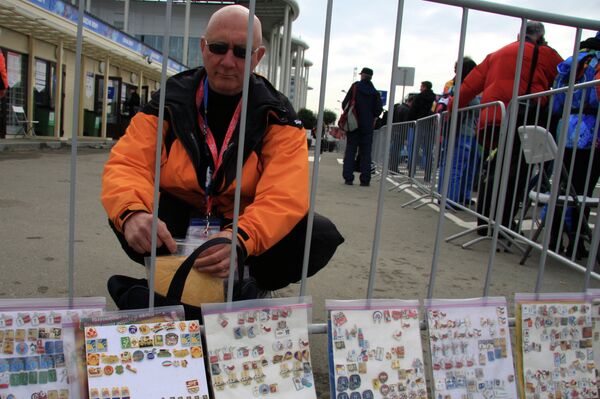 Occasional catalogues of Olympic pins are printed, but traders said it is generally impossible to know how many pins have been produced.

Each pin trader has his own style – perhaps relying on an easy charm, the ability to hustle, or knowledge of the best place to pick up customers.

Sergei Bantel, who was attending his first Olympics to help a veteran pin trader he had met through their shared Seventh Day Adventist faith, said it was fascinating to observe the pin traders, who are mainly men, at first hand.

One tactic frequently employed was to give pins to pretty girls for free in order to attract attention, said Bantel.

Duick, the trader from Vancouver, was forthright when approached by Yekaterina Beloshevskaya, 24, who was working in the Olympic accreditation office and wearing a dozen or so pins she had just begun collecting.

“Are you married?” Duick asked her.

“Yes,” the answer came back.

“That’s a shame because I am not,” he said, laughing.

In the end, Duick said he would give her a free pin if she would pose for a photograph with him. She agreed.

“It’s a funny game,” Beloshevskaya said afterwards. “Everyone is obsessed with this [pin collecting] and it’s contagious.”

More than one trader said they had been struck by the prettiness of Russian girls.

The 42-year-old collector from the Greek capital, who had laid out his pins for trade on a small bridge between the railway station and the Olympic Park, added that he was prepared to exchange pins “for a kiss, for a hug, for fun.” 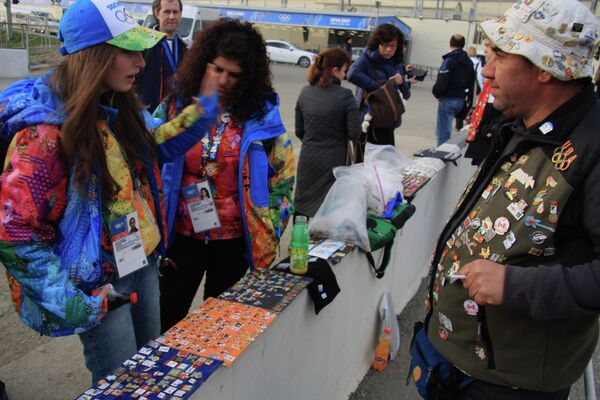 Ioannis Ioannidis, 42, trading pins with some Olympic volunteers. He says he is happy to exchange pins “for a kiss, for a hug, [or] for fun.”
© RIA Novosti . Howard Amos

There is also a more serious side to the pin traders, however.

Many said they can spend up to 10 hours a day plying their trade – inside Olympic venues if they have tickets to events or outside the entrances to areas to which they do not have access, like the media center and the Olympic village.

There is an official pin-trading zone inside the Olympic Park, sponsored by Coca Cola, but traders said that business there was slow.

Frederico Garcia, a fidgety 32-year-old from Spain hustling for people to trade with outside the Olympic media center, said he was trading about 200 pins a day and had over 40,000 pins at home, mostly attached to cork display boards.

Even in the evening he said he could not relax, and admitted to scanning people during dinner in the hope of catching sight of a rare pin.

“I enjoy travelling and meeting people,” said Garcia. “And I enjoy the pins.”