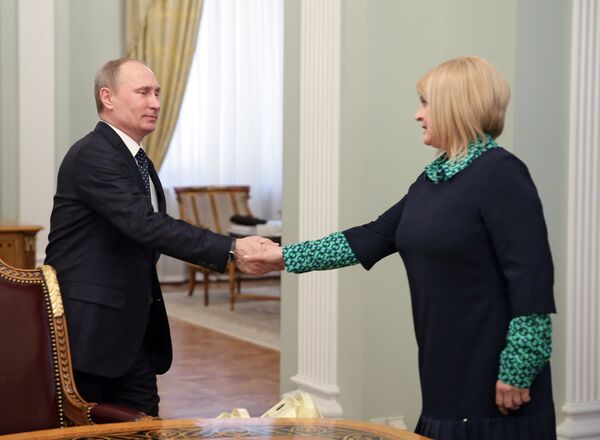 © RIA Novosti . Mikhail Metsel
/
Go to the photo bank
Subscribe
The Russian president formally nominated an outspoken Kremlin critic as Russia’s next ombudsman on Thursday, saying he expected her to watch Russia’s political life with “a critical eye.”

NOVO-OGARYOVO, February 13 (RIA Novosti) – The Russian president formally nominated an outspoken Kremlin critic as Russia’s next ombudsman on Thursday, saying he expected her to watch Russia’s political life with “a critical eye.”

Vladimir Putin told rights activists on January 23 that he would formally nominate Ella Pamfilova, former head of the Kremlin human rights council, to the post after a meeting with her.

The appointment followed the president’s meeting with Pamfilova and outgoing ombudsman Vladimir Lukin, whose second and final term expires on February 18.

“Before launching formal legal procedures, I should ask whether you agree [with the appointment],” Putin asked Pamfilova.

"Of course, I agree,” she replied. “I believe that I’m going to succeed. I would like to say that the most important thing is to be honest in doing your work, honest and consistent.”

Lukin earlier endorsed Pamfilova’s nomination, as did a number of prominent independent activists.

Pamfilova’s appointment will have to be approved by the State Duma, the lower house of parliament, before mid-March.

Russia established the institution of ombudsman in 1994. The official has powers to sue and to submit complaints to state agencies and the Duma on behalf of people whose rights have been violated in the country.

Pamfilova, a former federal minister and liberal lawmaker, was appointed in 2004 to head the presidential human rights council.

The Kremlin advisory body has a track record of criticizing Russian authorities, including on the cases of the jailed Yukos head Mikhail Khodorkovsky, who was freed in December, and the death in custody of lawyer Sergei Magnitsky.

Pamfilova resigned from her post in 2010, under then President Dmitry Medvedev, citing the council’s inability to influence Kremlin policy.