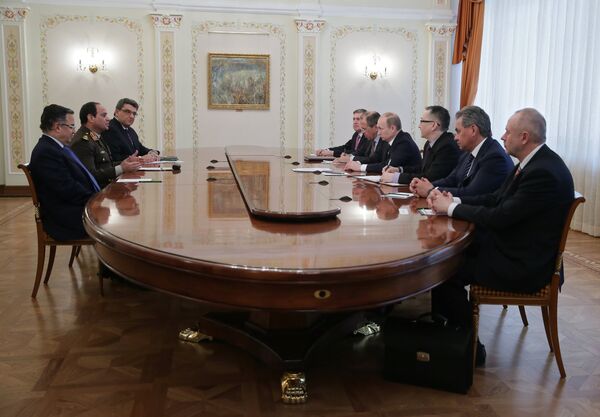 In a show of support for the Egyptian leader, Putin offered what appeared to be an endorsement for el-Sisi’s decision to run in an upcoming presidential election in the politically turbulent Middle Eastern nation.

“This is a very important decision, to take on such a mission for the fate of the Egyptian people. I wish you success, both personally and as a representative of the Russian people,” Putin said.

El-Sisi’s visit to Moscow points to a potential pivot toward Russia by Egypt – traditionally a stalwart US ally – that could dramatically reorient international relations in the Middle East.

At the meeting, El-Sisi stressed the need for Russia and Egypt to work together on combating terrorism, citing recent events in Syria as an example of terrorists threatening a country’s security.

El-Sisi has taken a firm grip over the country since the ouster of Islamist former President Mohammed Morsi in July. The often violent crackdown unleashed by the el-Sisi government has provoked a cooling in relations with Washington, which announced in October that it would slash longstanding military aid to Cairo. According to US officials, aid cuts included halting shipments of F-16 fighter jets, Apache helicopters, M1A1 tanks and advanced anti-ship missiles.

Moscow has apparently sought to exploit the Egyptian demand for defense materiel created by US disengagement.

Egypt’s government-controlled Al-Ahram newspaper reported Wednesday, citing unnamed defense officials, that the purpose of el-Sisi’s visit was to negotiate the terms of an arms deal originally proposed during a November meeting with Russian officials in Cairo. Various media reports have indicated the size of the deal could be several billion dollars.

No announcement on the arms deal was made following Thursday’s meeting. Putin said, however, that Russia was prepared to deepen cooperation with the country following presidential and parliamentary elections.

The Russian Foreign Ministry said Thursday that a meeting of a bilateral trade commission would be held in Moscow next month to discuss the revitalization of commerce between the two countries.

Putin expressed optimism at the potential to reverse a recent dip in trade and tourism.

“I am confident that we can not only overcome this decline, but also reach new heights, at least $5 billion in trade. We fluctuate somewhere around $3 billion today, but we can definitely reach $5 billion in the near future,” Putin said.

Updated with new lede, quotes from Putin and edits throughout.