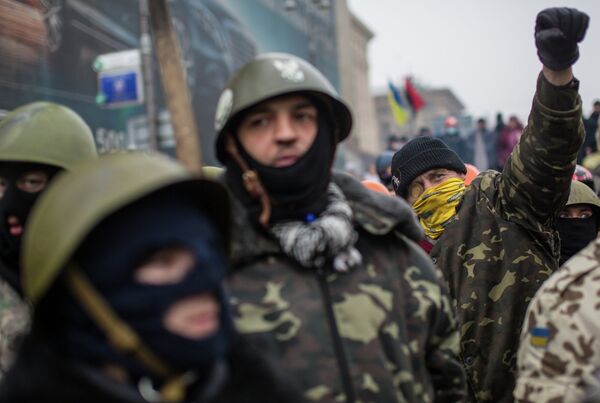 Alexander Lobodenko, a 34-year-old district court judge, was shot several times in the back by two assailants on a street near his home in central Ukraine late Tuesday night, the country’s Interior Ministry said.

One of the bullets grazed his spine, according to a statement on the Kremenchug district website, and Lobodenko died in intensive care at about 2 a.m. Wednesday.

Police have opened a criminal case into the death and said that Lobodenko was likely killed as a result of his judicial work. They did not speculate about which of the judge’s decisions may have motivated the attack.

One of Lobodenko’s most recent rulings, according to the Ukrainian newspaper Telegraf, sentenced two pro-European activists on January 28 to two months of house arrest.

The men had tried to break into the city hall building during a rally in Kremenchug days before, in a local instance of a broad anti-government protest movement that has engulfed Ukraine for the last two months.

The protests first ignited in November after President Viktor Yanukovych rejected an association agreement with the European Union at the last minute to sign an aid package with Russia instead. The demonstrations have since developed into a popular opposition coalition that has forced the resignation of the government and demanded that Yanukovych step down.

In the wake of the killing, Yanukovych issued a decree to amend legislation in order to “better protect judges and their family members.”

Updated to include information about the president's legislative initiative