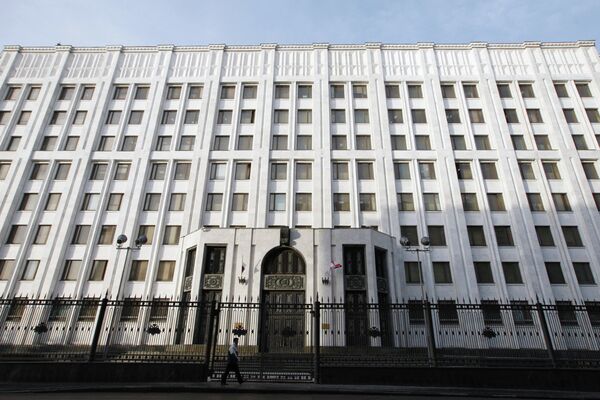 © RIA Novosti . Anton Denisov
/
Go to the mediabank
Subscribe
International
India
Africa
Russian investigators have reopened a probe into an alleged multimillion-ruble fraud at the Defense Ministry on the basis of one of the suspect's testimonies, Kommersant newspaper reported Monday.

MOSCOW, February 10 (RIA Novosti) – Russian investigators have reopened a probe into an alleged multimillion-ruble fraud at the Defense Ministry on the basis of one of the suspect's testimonies, Kommersant newspaper reported Monday.

One of the key figures in the case has claimed that the defense officials accused of masterminding the scheme were not behind it, and has pointed the finger at other ministry officials, the newspaper said.

Investigators say that the ministry hired a private company to clean fuel oil from the soil on the premises of a missile division unit in 2011, and subsequently paid the company for the job, despite the fact that the work was never completed.

They suspected two ministry officials – Lieutenant General Sergei Zhirov, who formerly headed the ministry’s technical supply department, and his former subordinate – of paying the firm 57 million rubles ($1.6 million) in order to receive a kickback from the contractor. The two were charged in November last year with abuse of office and large-scale fraud, Kommersant reported.

Yury Bendorsh, the general director of the company hired to clean the soil, was also charged with participating in the scheme.

Bendorsh claims that the alleged scheme was organized not by Zhirov and his subordinate, but by other Defense Ministry officials. His statement prompted investigators to reopen the inquiry into the case, which had already been closed, the media report said.