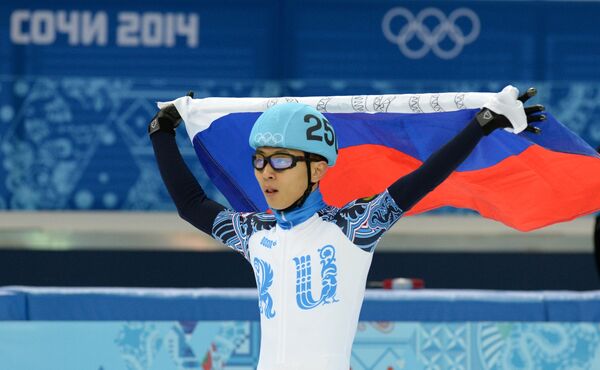 It is a third Games gold for Hamelin, 29, who won the 500 meter and the 5,000 meter relay in Vancouver. Ahn wins his fifth Olympic medal after three golds in Turin in 2006.

The 12-lap race was marked with British long-shot Jack Whelbourne crashing out and Han and Ahn waiting around to find out who won the silver and bronze. There was heartache for Vancouver bronze medalist J. R. Celski, who just missed out on a medal in fourth.

Hamelin won the 1,500 meter World Cup this season, while Ahn was third in the category. The World Cup runner-up, South Korea's Lee Han-Bin, had a poor race and finished sixth.

Ahn, 28, wins a second bronze medal for Russia at the Sochi Olympics, taking the home nations total to five with one gold in team figure skating.

Hamelin's gold, meanwhile, is Canada's second and lifts the nation to the top of the medal table. Russia is fifth.

Ahn, who became one of speedskating's all-time greats as a competitor for his native South Korea, won 2006 golds in the 1,500 meter, the 1,000 meter and the 5,000 meter relay. He also has 20 world championship gold medals to his name.

After falling out of favor in South Korea, Ahn switched allegiances to Russia in 2011 and has become the linchpin of the country's fledgling short-track program. He failed to qualify for the Vancouver Olympics.

His next tilt at gold will be in the 1,000 meter race Thursday.