US skier Julia Mancuso’s enviable record of Olympic success, including the lead in Monday's Sochi Olympic super combined, all comes down to her “free spirit” and unorthodox training methods, her close friend and British skier Chemmy Alcott said.

Following Monday morning’s downhill, Mancuso took a 0.47-second lead into the second stage of the super combined, the slalom, which was to take place later in the day.

A medal in the event would be the fourth Olympic podium for the 29-year-old California-based skier, further burnishing her reputation for peaking at the big events even after modest World Cup results.

“I knew that was going to happen with Julia. I just knew it,” Alcott said. “You can never expect anything less from her at the Olympics … I think that is to do with her free spirit.”

“She trains differently from all of us, which means that when she gets to a big event, she’s uninhibited and lets her talent shine. You saw that today.”

Mancuso has not competed in a slalom race for over a year and faces a stiff challenge from all-rounders like Tina Maze, who is third, but Alcott said she should still be considered the favorite to hold on to her lead. If Mancuso can win, she will go one better than her surprise super combined Olympic silver in 2010. 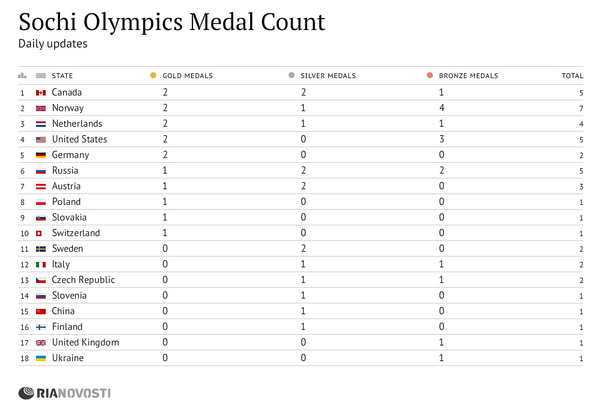 “I just said to her: ‘You did this four years ago – nothing special.’ That’s a decent lead,” Alcott said. “[Second-placed] Lara [Gut] and Julia are probably in the same boat with the slalom skills but Tina’s obviously a bit stronger. You wouldn’t bet against her still. The podium is hers to give away today.”

Alcott was 16th in the downhill, but has opted against starting in the slalom, historically her weakest event. The “metalwork” in her right leg from previous operations made competing in the slalom all but impossible, she said.