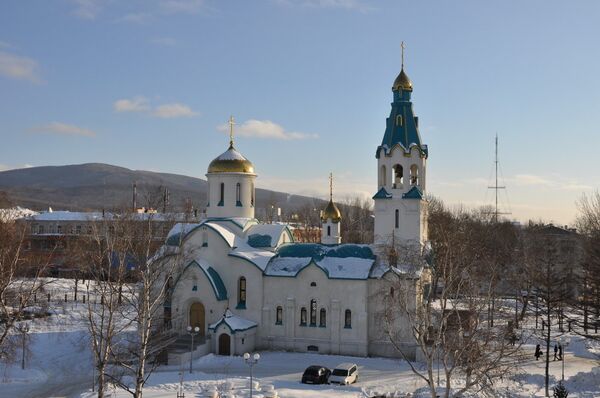 A gunman opened fire in an Orthodox church on the island in Russia’s Far East, killing two and injuring six people, the local church authority said on its website Sunday.

The man broke into the Cathedral of the Resurrection in Yuzhno-Sakhalinsk, on Sakhalin Island, at around 7 a.m. Moscow time (3 a.m. GMT), and fired several shots, killing a nun and a worshiper.

Others have been hospitalized with gunshot wounds in the legs, but their lives are not under threat, archbishop Tikhon said.

The attacker was detained after the shooting at the scene by police. His motive is not yet known. An investigation is ongoing.

Russia’s Investigative Committee said Sunday the attacker in his 20s was a guard at a local agency. He faces life in prison if convicted. The suspect will undergo a mental evaluation.

The Patriarch of Moscow and All Russia, Kirill, held a prayer service in Moscow for the victims of the attack in Yuzhno-Sakhalinsk, saying they had “died like heroes and soldiers on the front line.”

He said the attacker was likely a mentally ill person and that people in the church had died as they tried to prevent him desecrating the relics.

The cathedral, which accommodates up to 450 people, is the main Russian Orthodox church in the region that includes Sakhalin and the Kuril Islands.

The shooting comes days after a teenager killed a teacher and a policeman in his school in Moscow.