Putin and Abe Enjoy a Dream Meeting at Talks 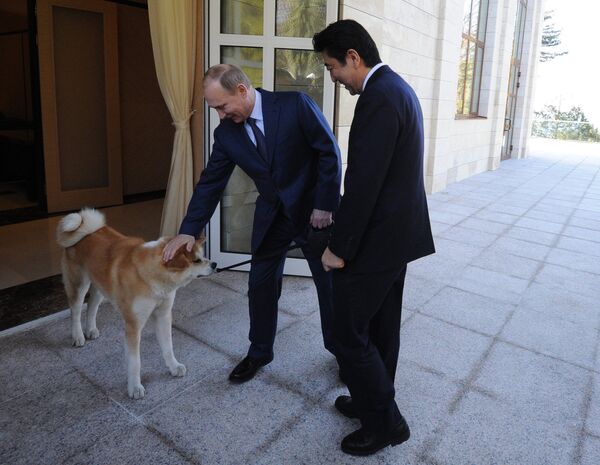 Abe brought Yume, whose name means "Dream" in Japanese, as a gift for Putin when he visited Russia in July 2012. The three-month-old puppy was a gift to Putin from the head of the Akita prefecture to show gratitude for Russia's assistance after Japan's devastating earthquake and tsunami.

“Yes, but she can bite sometimes,” Putin replied.

The talks between the two leaders focused mainly on economic cooperation as Putin and Abe decided to leave a controversial territorial dispute over the Kuril islands to experts, presidential spokesman Dmitry Peskov said.

The Japanese premier thanked Putin for the lavish opening ceremony of the 2014 Sochi Winter Olympics, saying that he was “deeply moved by this display of Russia’s biggest achievements in art and technology” and pleased by the fact that the impressive show involved some 12,000 pieces of equipment produced in Japan.

Putin said that Russia was ready to share its experience of preparing and hosting the Olympic Games. Tokyo will host the Olympics in 2020.

“I think it would be interesting for your specialists to see how the Sochi Olympics are organized,” he said.

Peskov said the two leaders agreed to hold their next meeting on the sidelines of the G8 summit to be held in Sochi on June 5.

Putin, known for his affection for dogs, also has a Labrador named Koni and a Bulgarian shepherd named Buffy, which was given to him by his Bulgarian counterpart Boiko Borisov in November 2010.