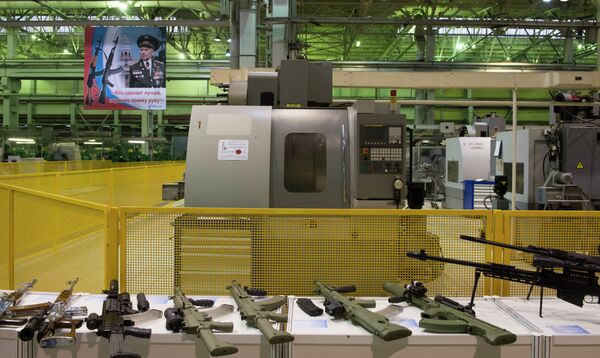 “According to preliminary estimates, the losses incurred in 2013 will reach 1.7 billion rubles,” Alexei Krivoruchko said.

Krivoruchko, who had earlier acquired a 49 percent stake in Kalashikov Concern, took over the helm of the famed small arms maker on January 31.

A savvy businessman and a skillful manager, Krivoruchko faces a daunting task of making Kalashnikov a profitable and efficient company to become a major supplier of Russian weaponry abroad by 2020.

He told reporters Friday that the company would focus on reducing production costs and increasing sales through streamlining the manufacturing process and aggressive global marketing.

He also said Kalashnikov Concern, which was formed last year through the merger of the Izhmash arms factory and several other defense plants, currently has a “dismal” worker-to-management ratio that affects the efficiency of its operation.

“We currently have only 26 percent of the personnel actively involved in production, it is very wrong, the management bloat is overwhelming,” Krivoruchko said.

According to Krivoruchko, the company has already started taking concrete steps to tackle the current crisis.

Kalashnikov signed in January a contract with a US firm to sell up to 200,000 firearms annually to customers in the United States and Canada. The company is also in talks with several Indian firms to set up joint ventures to produce small arms.

As part of its promotional strategy, Kalashikov could hire Hollywood tough guy and martial arts guru Steven Seagal as an international ambassador for Kalashnikov-made weaponry, according to the state-owned Rostech corporation, which owns a 51 percent stake in Kalashnikov Concern.