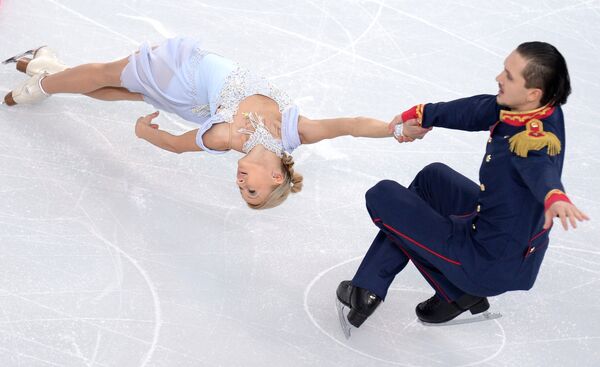 Russia charged into the lead of the inaugural team figure skating event at its home Olympics on Thursday as world champions Tatiana Volosozhar and Maxim Trankov won the short program.

SOCHI, February 6 (R-Sport) - Russia charged into the lead of the inaugural team figure skating event at its home Olympics on Thursday as world champions Tatiana Volosozhar and Maxim Trankov won the short program.

Fears were high of a repeat of the unconvincing skate to the same waltz at the European championships in Budapest last month, but Volosozhar and Trankov oozed class on home ice to score a session-high 83.79, which converted to 10 team points for their country.

The Canadian duo of Megan Duhamel and Eric Radford put in a masterfully elegant routine for second place and 73.10 points. It was set to music composed by Radford as a tribute to his late coach, and those emotions, mixed in with the elation of a flawless performance, elicited tears from Duhamel at the climax.

The results left Russia top of the nations' standings after the first day of competition, on a total of 19 points following Evgeny Plushenko's second place by finishing runner-up to Yuzura Hanya in the men's short program.

Canada is two points behind on 17 points, with Duhamel and Radford's second place following Patrick Chan's third place in the men's short program.

The next day of competition is Saturday with the women's and ice dance short program and the pairs' free skate.

It is the first time the team event is being held in Olympic competition.

Countries send out skaters in all four categories: men's and women's individual, pairs and ice dance. They all perform a short program, the points are aggregated and the top five nations progress to the free program while the others are eliminated.

Adding tactical intrigue to the event, nations may switch skaters after the short program but only if the replacements are part of the country's team in the traditional event.

The introduction of the team event gives skaters a second shot at a medal that they have welcomed, but it also comes with the inherent risk of injury before the traditional individual disciplines.