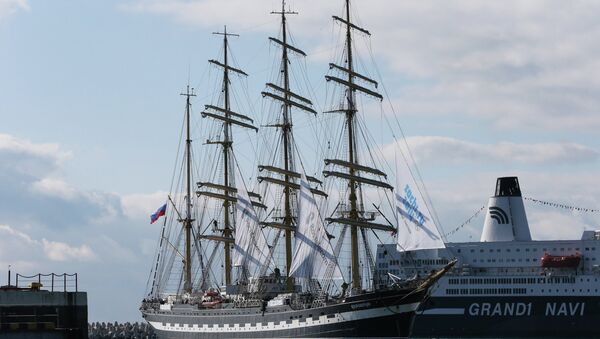 Russia's famous tall ship, the Kruzenshtern, made a port call at the Olympic host city of Sochi Thursday, said Rosmorport, the state-owned company that oversees development of Russian seaports.

The Kruzenshtern was moored for three weeks in Vancouver, British Columbia (Canada) during the 2010 Winter Olympics and became one of the most important symbols of support for the Russian team in its ultimately unsuccessful sports campaign.

The Kruzenshtern is widely regarded as one of the jewels of the Russian sailing fleet. It was built in Germany in 1926 as a windjammer class ship (then called The Padova).

The ship was transferred to the Soviet Union as a reparation payment after World War II and renamed after the legendary Russian navigator, Johann Kruzenshtern (1770-1846), who carried out Russia's first round-the-world trip.

Since the 1970s, the ship has served as a training vessel for naval cadets.