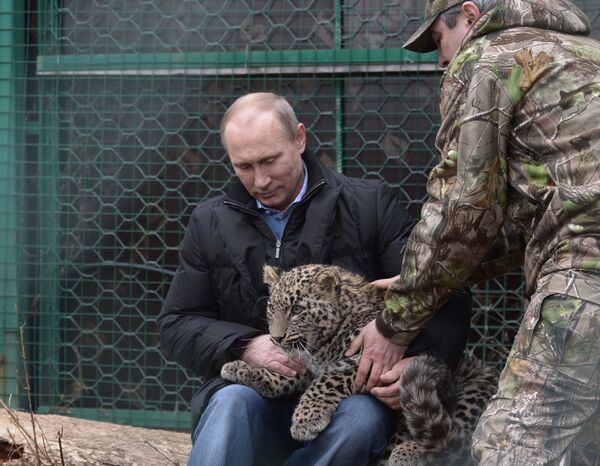 There, he entered a leopard nursery to pet 6-month-old Grom (“Thunder”) in front of the cameras.

He praised leopards’ sexual prowess after learning that they can mate up to 274 times a week when in heat. “Take example!” Putin told one of the journalists, the Moskovsky Komsomolets daily reported.

Grom, agitated by the crowd accompanying Putin, eventually snapped and attacked journalists, scratching one and biting another on the knee.
This prompted Putin to linger after the crowd left, trying to calm down the cub.

Putin, a noted animal lover, has visited the leopard center in Sochi several times since its opening in 2009.

The center, which currently houses six adult Persian leopards and four cubs, is working to reintroduce the big cats into the Caucasus Mountains, where their population has gone extinct.

The Persian leopard, one of nine leopard subspecies, is a threatened animal, with its population in the wild believed to be no more than 1,200, mostly in Iran, Afghanistan and Turkmenistan.

Other animals Putin has taken interest in include tigers, polar bears, dogs, horses, cranes and octopi.