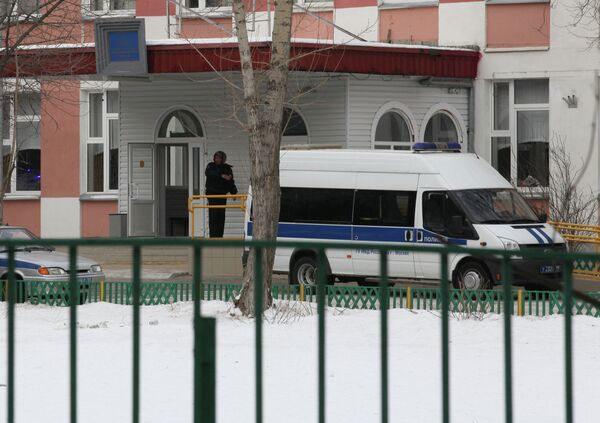 A 15-year-old boy who was a near straight-A student fatally shot a teacher and a policeman with a rifle at his school in northeast Moscow on Monday, according to police and media reports.

MOSCOW, February 3 (RIA Novosti) – A 15-year-old boy who was a near straight-A student fatally shot a teacher and a policeman with a rifle at his school in northeast Moscow on Monday, according to police and media reports.

The top spokesman for Russia’s Investigative Committee said he believed the teen had suffered a nervous breakdown because there were no immediately apparent grounds to assume that the shooting was related to the boy’s academic performance.

The student reportedly made his way into the school with a rifle by threatening a guard who immediately called the police. Investigators said the weapon belonged to the boy’s father.

The teen barged into a classroom where his geography teacher was giving a lesson and fatally wounded him, then held about 20 students hostage, authorities said.

The gunman also shot a police officer who arrived on the scene and wounded another, police said.

Authorities said the incident, which occurred at School 263 in the city’s Otradnoye district, came to an end when the boy’s father was brought to the scene and managed to convince his son to surrender.

One of the students told the Life News television network that the attacker was one of the best students in the class and was not involved in any conflicts at school, including with the murdered teacher.

However, the Kommersant newspaper said the student was angry at the teacher for preventing him from being awarded a gold medal for academic performance.

Television footage showed the building being surrounded by police and emergency vehicles. State news broadcaster Rossiya-24 reported that an Emergency Situations Ministry helicopter was used to evacuate the injured policeman.

Investigators have opened three criminal cases: for hostage-taking, murder and assault on a police officer.

Mayor Sergei Sobyanin has ordered security checks at the city’s schools to prevent another such incident from occurring in the future. School shootings are extremely rare in Russia.

Evacuation of students from school № 263