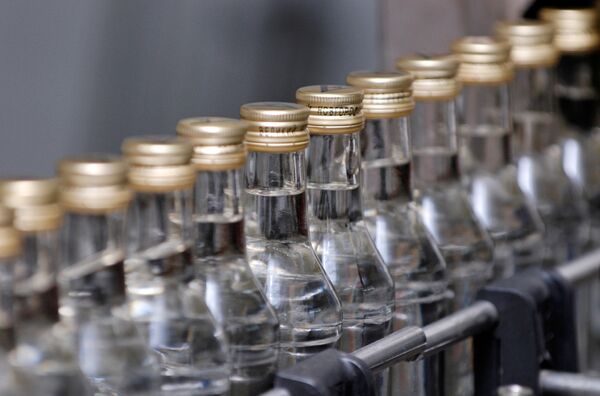 © RIA Novosti . Mikhail Mordasov
/
Go to the photo bank
Subscribe
A new report detailing the devastating toll of vodka on male life expectancy in Russia has been published, just as the country marks the unofficial 149th anniversary of the spirit’s invention.

MOSCOW, January 31 (RIA Novosti) – A new report detailing the devastating toll of vodka on male life expectancy in Russia has been published, just as the country marks the unofficial 149th anniversary of the spirit’s invention.

The study published Friday in British medical journal The Lancet has found that 25 percent of Russian men die before the age of 55, compared with only 7 percent of men in the United Kingdom.

Many of those deaths are thought to have been caused by Russia's long-abiding devotion to heavy drinking.

Average life expectancy for men in Russia is 64 years, compared to 78.5 for British men.

The study, which is the work of a team of Russian and British researchers, reveals that Russian male smokers who drink three or more half-liter bottles of vodka weekly double the risk of dying compared with those who consume less than half a liter a week.

Dr Jurgen Rehm, of the Centre for Addiction and Mental Health in Toronto, Canada, wrote in a comment on the study that the way in which alcohol was consumed in Russia also explained the scale of its effect on health.

“It is the combination of high overall volume with the specific pattern of episodic binges that is necessary to explain the high level and fluctuating trends of total and alcohol-attributed mortality in Russia," Rehm said.

Rehm said that Russia life expectancy rate, among the lowest 50 countries in the world, was evidence that more effective anti-alcohol and tobacco measures need to be put in place.

The Russian government has in recent years embarked on a crusade against alcohol abuse, describing it as a "national disaster," and says it aims to halve consumption by 2020, while rooting out illegal production and sales.

Russia's government has launched a crusade against alcohol abuse, describing it as a "national disaster" and aiming to halve consumption by 2020 and root out illegal production and sales.

Due to Russian alcohol policy reforms, the consumption of spirits has fallen by a third since 2006, as has the risk of death before the age of 55, Lancet’s study said.

"Russian death rates have fluctuated wildly over the past 30 years as alcohol restrictions and social stability varied under Presidents (Mikhail) Gorbachev, (Boris) Yeltsin, and (Vladimir) Putin, and the main thing driving these wild fluctuations in death was vodka. This has been shown in retrospective studies, and now we've confirmed it in a big, reliable prospective study," said study co-author Professor Sir Richard Peto of the University of Oxford.

Study leader Professor David Zaridze from the Russian Cancer Research Centre in Moscow said the significant decline in Russian mortality rates following the introduction of moderate alcohol controls in 2006 demonstrated the reversibility of the health crisis from hazardous drinking.

“People who drink spirits in hazardous ways greatly reduce their risk of premature death as soon as they stop," Zaridze said.

Attempts to combat excess alcohol consumption have resulted in undesired outcomes in the past, however. Strict restriction imposed by Soviet leader Mikhail Gorbachev in 1985 led to a fall in deaths rates but also caused a proliferation of often lethal moonshine.

Pioneering Russian chemist Dmitry Mendeleyev earned his doctorate on January 31, 1865, with his successful defense of a dissertation titled “On the Combinations of Water with Alcohol.”

In this work, Mendeleev claimed to have invented the ideal recipe for vodka, which he said should contain 40 percent of alcohol by volume.

The TV station of popular online Russian tabloid LifeNews marked Friday’s anniversary with a report detailing the beneficial uses of vodka, none of which actually included drinking it.

A LifeNews reporter showed how vodka can be used to painlessly remove band-aids, as an antiseptic to clean items that have dropped on the floor, as a supposed remedy for dandruff, or an emergency substitute for car fuel.

Vodka is also typically used in small amounts in Russia as a traditional method for treating minor complaints such as headache and toothache.