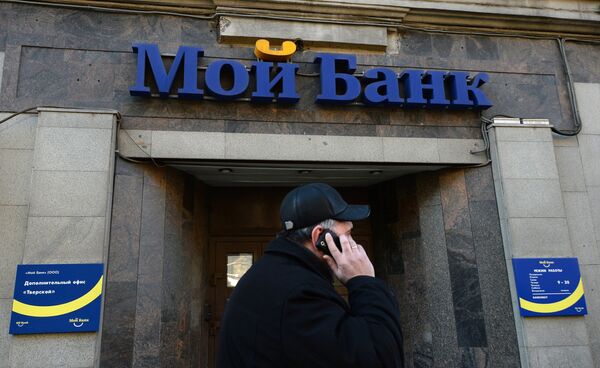 Russia revoked the license of a bank formerly owned by billionaire environmentalist Gleb Fetisov on Friday in the latest move in an ongoing crackdown on the financial sector.

MOSCOW, January 31 (RIA Novosti) – Russia revoked the license of a bank formerly owned by billionaire environmentalist Gleb Fetisov on Friday in the latest move in an ongoing crackdown on the financial sector.

My Bank had not honored credit obligations and was guilty of false reporting, the central bank said in a statement.

It was impossible to clean-up My Bank without revoking its license because all of its assets had apparently been siphoned off, the head of the Deposit Agency Insurance said Friday.

“It was impossible to make My Bank a viable entity because there was nothing there. It’s an astonishing situation – about 90 percent of the assets have disappeared,” Yuri Isayev said.

Fetisov, who is the chairman of Green Alliance People’s Party and a former mayoral candidate in several Russian regional elections, sold My Bank in December to a group of individuals reportedly close to the bank’s chairman, Mikhail Miriskom. The price for the sale has not been made public.

The transaction took place shortly after reports that clients at the mid-size bank were having difficulty withdrawing money. My Bank then forbade the withdrawal of money or the opening of new accounts.

Dozens of Russian banks have lost their licenses in recent months as the regulator seeks to tighten oversight of the country’s lenders and rein in shadow banking activity.

Elvira Nabiullina, who was appointed chairwoman in June, has made the campaign a key part of her tenure at the regulator. The move has caused unease amongst smaller banks, and experts have warned that clients could migrate to the large state-owned banks that dominate Russia's financial sector.

“Oversight work on the question of low quality assets and management of the bank has been going on for a long time,” Sukhov said, according to Prime.

The central bank also said Friday that it had revoked the license of small Moscow-based lender Priroda.