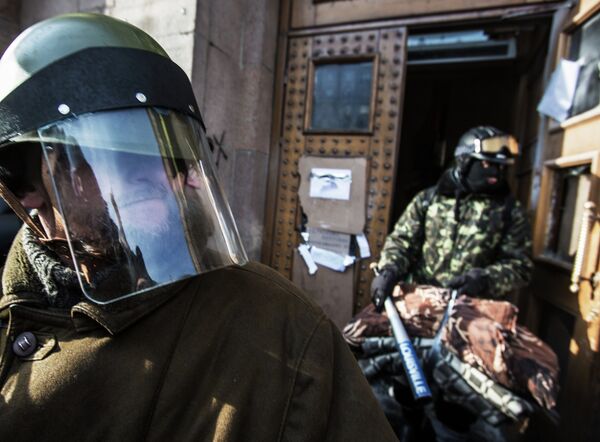 Ukraine’s parliament has passed an amnesty for anti-government activists jailed during recent public unrest, but opposition politicians Thursday rejected the initiative, describing it as an attempt to undermine their cause.

KIEV, January 30 (RIA Novosti) – Ukraine’s parliament has passed an amnesty for anti-government activists jailed during recent public unrest, but opposition politicians Thursday rejected the initiative, describing it as an attempt to undermine their cause.

The ruling Party of Regions-dominated legislature passed the amnesty law by 232 votes, six more than the required minimum, overnight Wednesday.

The law mandates the release of dozens of protesters arrested since the country’s current wave of anti-government demonstrations began in November. It will only come into effect, however, if the opposition vacates occupied buildings and opens up roads that it has blocked in the center of the country's capital, Kiev.

Opposition politicians have described the amnesty proposal as creating a hostage situation. UDAR party leader Vitali Klitschko said the new law would “raise the temperature in society,” according to media reports.

Other opposition leaders told demonstrators gathered on Kiev's Independence Square that there were procedural violations during the passage of the bill and confirmed that activists who have created a large tented camp protected by barricades in Kiev would not be quitting.

Protesters in Ukraine took to the streets in November after President Viktor Yanukovych backed off from signing landmark trade deals with the European Union. The movement has since transformed into a loose coalition of opposition groups seeking Yanukovych’s ouster.

The opposition has 15 days to comply with the law after it comes into force if the detained activists are to be freed, leader of the nationalist Svoboda party Oleh Tyahnybok said Thursday, according to media reports.

The amnesty bill is part of a package of concessions from the authorities, who have struggled to cope with a recent violent escalation of protests during which at least three demonstrators have been killed.

Prime Minister Mykola Azarov, a close ally of Yanukovych, resigned Tuesday. On the same day, parliament repealed a series of unpopular anti-protest laws that had sparked huge demonstrations and clashes with riot police.

Opposition leaders have rejected offers from Yanukovych to become part of a new government and have repeated their longstanding demand for early elections.