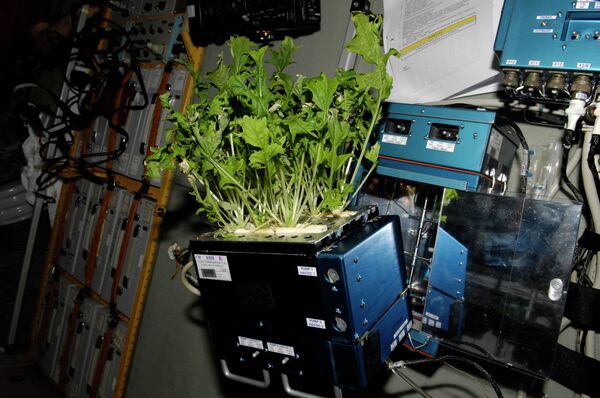 © Photo : NASA
Subscribe
A variety of crops have been successfully harvested on board the International Space Station and verified as safe to eat, a Russian scientist said Wednesday.

MOSCOW, January 29 (RIA Novosti) – A variety of crops have been successfully harvested on board the International Space Station and verified as safe to eat, a Russian scientist said Wednesday.

“The experiments with peas have been very promising,” Margarita Levinskikh, a researcher at the Institute of Biomedical Problems told an annual space conference in Moscow.

Russian cosmonauts have also grown Japanese leafy greens and a variety of dwarf wheat that has produced seeds of “just extraordinary quality,” she added.

Levinskikh said that next year Russian cosmonauts will sow rice, tomatoes and bell peppers after repairing the station’s Lada greenhouse, a cooperative effort between the institute and the Space Dynamics Laboratory at Utah State University.

Researchers have relied so far on analyzing root modules of the crops to verify them as safe to eat. They plan to grow rice and the grass species purple false brome, whose genomes have already been sequenced, in order to look for possible genetic abnormalities after they have grown in space.

Space-based agriculture has long been of interest to scientists, as plants not only scrub carbon dioxide exhaled by astronauts, but could be used to recycle human waste into food.

Currently all food onboard the International Space Station is flown up on periodic resupply missions.

Long-duration deep space missions without agriculture would require many months’ or years’ worth of food, greatly adding to their launch weight.

Astronauts onboard the ISS already drink water distilled from sweat and urine.